A Spotlight on a Primary Source by George Wallace 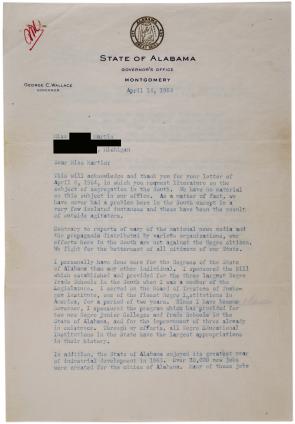 In 1958, George Wallace ran against John Patterson in his first gubernatorial race. In that Alabama election, Wallace refused to make race an issue, and he declined the endorsement of the Ku Klux Klan. This move won Wallace the support of the NAACP. Patterson, on the other hand, embraced Klan support, and he trounced Wallace in the election. In 1962 Wallace, having realized the power of race as a political tool, ran for governor again—this time as a proponent of segregation. He won by a landslide.

In 1964, Wallace decided to make a run for the presidency as a Democratic candidate. The first Democratic primary was held in Wisconsin. Local politicians treated Wallace’s candidacy as a joke, but Wallace shocked his critics when he received 266,000 votes—one-third of the 780,000 votes cast. On April 8, one day after the Wisconsin primary, Michigan resident Ms. Martin wrote to Wallace asking him for literature on segregation.

The sentiments expressed in Wallace’s reply stand in stark contrast to the reality of race relations in Alabama during his time as governor. Between the time of Wallace’s inauguration and his correspondence with Martin, Alabama had seen the bombings in Birmingham as well as Wallace’s face-off with federal forces over the integration of the University of Alabama.

Despite growing conflict over race and civil rights, Wallace wrote Martin that "we have never had a problem in the South except in a few very isolated instances and these have been the result of outside agitators." Wallace asserted that "I personally have done more for the Negroes of the State of Alabama than any other individual," citing job creation and the salaries of black teachers in Alabama. He rationalized segregation as "best for both races," writing that "they each prefer their own pattern of society, their own churches and their own schools." Wallace assured Martin that Alabamans were satisfied with society as it was and that the only "major friction" was created by "outside agitators." Increasing racial violence and the Civil Rights Movement, however, pointed toward a changing equilibrium in race relations in Alabama.

White and colored have lived together in the South for generations in peace and equanimity. They each prefer their own pattern of society, their own churches and their own schools—which history and experience have proven are best for best for both races. (As stated before, outside agitators have created any major friction occurring between the races.) This is true and applies to other areas as well. People who move to the south from sections where there is not a large negro population soon realize and are most outspoken in favor of our customs once they learn for themselves that our design for living is the best for all concerned.

Read the document introduction, the excerpt, and the transcript. Then apply your knowledge of American history in order to answer the questions that follow.