George Washington on the abolition of slavery, 1786 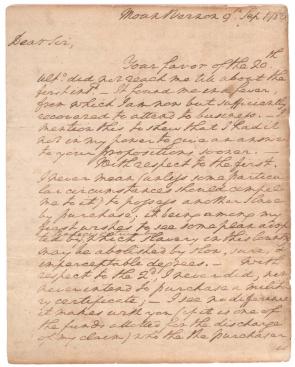 Of the nine presidents who were slaveholders, only George Washington freed all his own slaves upon his death. Before the Revolution, Washington, like most White Americans, took slavery for granted. At the time of the Revolution, one-fifth of the colonies’ population lived in bondage. Although most enslaved people were in the South, slavery was a legal institution in each of the thirteen colonies. Fourteen percent of the state of New York’s population was enslaved, for example, and New York City had more enslaved people than any other city in the colonies except Charleston, South Carolina.

Washington gradually came to realize that slavery was immoral and contrary to the Revolutionary ideals of liberty and equality. In 1774 he endorsed a document, known as the Fairfax Resolves, which condemned the slave trade as “unnatural” and recommended that no more enslaved people be imported into the British colonies. Five years later, he approved a plan to grant enslaved men their freedom in exchange for service in the Continental Army.

Washington never spoke out publicly against slavery. But in this private letter to fellow Virginian John Mercer, dated September 9, 1786, and written at a time when he held 250 men, women, and children in slavery, Washington avows his dislike of the institution of slavery, an institution that violated the ideal of freedom and equality: “I never mean . . . to possess another slave by purchase; it being among my first wishes to see some plan adopted by which slavery in this Country may be abolished.”

With respect to the first. I never mean (unless some particular circumstances should compel me to it) to possess another slave by purchase; it being among my first wishes to see some plan adopted by, [inserted: The Legislature by] which slavery in this Country may be abolished by slow, sure, & imperceptable degrees.