A Spotlight on a Primary Source by Harry S. Truman 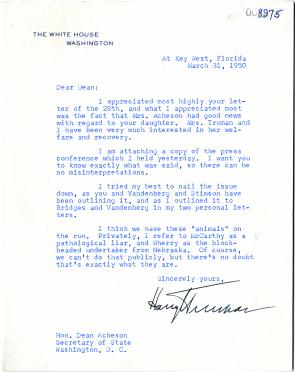 In February 1950, Senator Joseph McCarthy alleged in a speech in West Virginia that more than 200 staff members at the Department of State were known to be members of the Communist Party. During Harry Truman’s press conference on March 30, the President characterized McCarthy’s behavior as a Republican attempt to "sabotage the bipartisan foreign policy" and McCarthy as "the best asset that the Kremlin can have." A transcript of that press conference is available at the American Presidency Project.

In this personal letter to Secretary of State Dean Acheson written the following day, Truman first sent his best wishes for Acheson’s daughter Mary, who was recovering from tuberculosis. Truman concluded the letter with a condemnation of McCarthy and Senator Kenneth Wherry, the Republican leader in the Senate:

I think we have these ‘animals’ on the run. Privately, I refer to McCarthy as a pathological liar, and Wherry as the block-headed undertaker from Nebraska. Of course, we can’t do that publicly, but there’s no doubt that’s exactly what they are.

For Truman, Acheson was a loyal and vital member of the government and McCarthy was merely a partisan bully exploiting Cold War fears. McCarthy’s rampant accusations of disloyalty and communist sympathies continued until his attempt to discredit the US Army backfired. In 1954, the Senate voted to censure McCarthy. 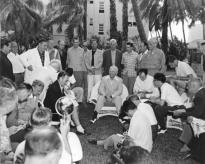 Read the introduction and examine the image of President Truman’s letter and the photograph of Truman’s press conference. Then apply your knowledge of American history to answer the questions that follow:

*** Note–The introduction references the press conference of March 30, 1950, which is shown in the photograph. It is beneficial to follow the suggested link to the transcript of that event http://www.presidency.ucsb.edu/ws/index.php?pid=13755) and to concentrate on the segment beginning with the question by a member of the press corps, “Do you think that Senator McCarthy can show any disloyalty exists in the State Department?” and continuing through the question and answer segment to the President’s response, “The greatest asset that the Kremlin has is the partisan attempt in the Senate to sabotage the bipartisan foreign policy of the United States.”