A Spotlight on a Primary Source by Henry Knox

On Christmas Day in 1776 the American Revolution was on the verge of collapsing. Since the signing of the Declaration of Independence, the American forces had been driven from New York City to Valley Forge, Pennsylvania, and reduced to a mere three thousand men. Washington knew that a victory was needed to raise the Americans’ morale and turn the tide of war. With winter on its way and thousands of enlistments soon expiring, his time was running out. Washington, seeing an opportunity, decided to attack Trenton, New Jersey, a nearby town guarded by only fifteen hundred Hessians, German mercenaries fighting for the British. 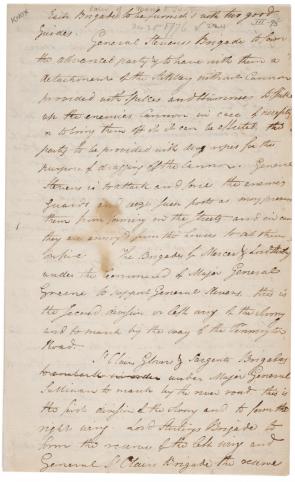 Washington’s officers received orders detailing the plan to cross the Delaware River late on Christmas Day and "arrive at Trenton at five oClock" to surprise the enemy forces. This copy of Washington’s orders, with a map of Trenton drawn on the back, belonged to Henry Knox, chief artillery officer, and was written in his own hand. Also presented here is Knox’s firsthand account of the battle, in a letter written to his wife Lucy on December 28.

Knox played an important role in the monumental river crossing and historic battle. As Knox wrote his wife "the night was cold & stormy It haild with great violence," and ice floes and a brutal winter storm made the Delaware River almost impassable on December 25. Washington had ordered the dangerous and difficult task of crossing the river in treacherous winter conditions to be placed "under the direction of Colonel Knox." Knox never left Washington’s side, shouting out the general’s orders until every last man was safely across.

Although foul weather kept the Americans from reaching Trenton until eight in the morning, it also concealed their approach and afforded them the essential element of surprise. Knox wrote that "the Troops march’d with the most profound silence and good order." The battle proceeded almost exactly as drawn up Washington’s orders. Washington's army, split in two, surprised the Hessians, trapped them in the town, and overpowered the enemy force. Knox wrote that the surprise was so successful that "The hurry fright & confusion of the enemy was unlike that which shall be when the last Trump shall sound."

Knox’s artillery played a decisive role, inflicting heavy damage inside the close quarters of the town. The Continentals killed or captured nearly one thousand Hessian troops during their victory at Trenton. Knox modestly wrote his wife, "The General has done me the unmerited great honor of thanking me in public orders in terms strong & polite," noting "I should blush to mention to any other than to you my dear Lucy." Indeed, Washington did recognize Knox’s service; two days later Knox was promoted to Brigadier General of Artillery.

Despite the victory at Trenton, the Americans began 1777 at a great disadvantage and Continental defeats would continue to outnumber victories. Tactically, the battle cost the British a small but noticeable part of their fighting force and deprived them of control of southern New Jersey. More importantly, the victory restored hope in the Revolution just when it was dangerously low; soldiers began reenlisting, recruitment grew, and support on the home front increased significantly. The American forces began building the momentum that eventually enabled them to win the Revolution. When Knox wrote these orders, shortly before the dramatic river crossing, the American Revolution appeared to be on its dying breath. But by the time the orders had been successfully carried out, the patriots’ cause was given new life.

A full transcript is available for the Order of march to Trenton. 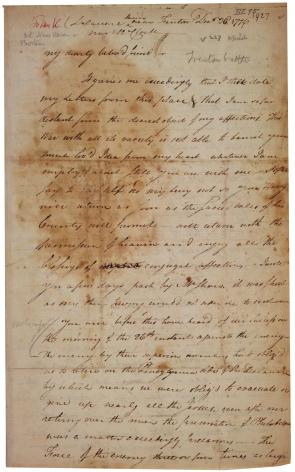 It haild with great violence the Troops march’d with the most profound silence and good order. they arrivd by two routs on roads at the same time about half an hour after day light. [inserted: to within one mile of the Town] the storm continued with great violence but was in our backs & consequenly in the faces of our Enemy – about half a mile from the Town was an advancd Guard on each road consisting of a Captains Guard – these Guards we forc’d & enter’d the Town with them pell-mell, & here succeeded a scene of war of which I had often Conceived but never saw before. The hurry fright & confusion of the enemy was unlike that which shall be when the last Trump shall sound – they endevord to form in streets the heads of which we had previously the possession of with Cannon & Howitzers, these in the twinkling of an eye cleard the streets, the backs of the the houses were resorted to for shelter, these prov’d ineffectual the musketry soon dislog’d them finally they were driven through the Town into an open plain beyond the Town – here they form’d in an instant – during the contest in the streets – measures were taken for putting an entire stop to their retreat by posting troops and Cannon in such passes and roads as it was possible for them to get away by – the poor fellows after they were form’d on the plains saw themselves Completely surrounded – the only resource left was to force their way thro numbers unknown to them – strongly posted with Cannon. The Hessians lost part of their Cannon in the Town they did not relish the project of forcing, & were oblig’d to Surrender upon the spot with all their artillery.

A full transcript is available for Henry Knox’s letter to Lucy Knox.