Henry Knox on the British invasion of New York, 1776

A Spotlight on a Primary Source by Henry Knox 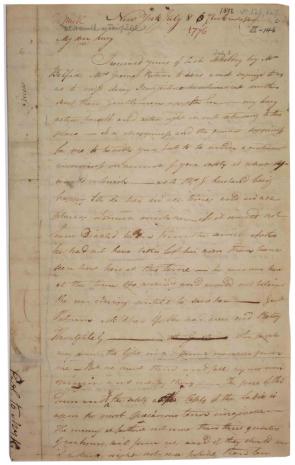 When twenty-six-year-old Henry Knox, the Continental Army’s artillery commander, penned this letter to his wife, Lucy, on July 8, 1776, patriot morale was at a low point. The summer of 1776 was a particularly hard time as word of Congress’s Declaration of Independence had not yet reached George Washington’s headquarters, while just five days earlier, the British had orchestrated the largest amphibious landing of the eighteenth century when they put a powerful force on Staten Island. Knox understood the critical nature of the Continental Army’s situation when he said, “The eyes of all America are upon us, the matters which we are to act are of infinitely high import as we play our part posterity will bless or curse us.&rdquo Knox told his wife of a little more than two years that 10,000 redcoats occupied the other side of New York harbor; by the middle of August there would be 32,000 redcoats to face-off against the 7,000 rag-tag troops the Americans had assembled.

In the midst of this military showdown, Knox’s letter allows us to see the human element of warfare. During the Revolutionary War, wives were known to accompany their husbands in their service to the nation. In a previous letter, Lucy expressed great desire to join her husband in New York, citing the travels of other officers’ wives. With great emotion, Henry told her not to follow the example of another military couple as the officer is merely a man and "wants to see her because she is a Woman." Knox wrote that his love for her was too great to risk her capture at this grave time. He was right; the Americans suffered serious setbacks in New York and retreated through New Jersey and into Pennsylvania in the coming months.

I received yours of last Saturday by Mr Belford, Mrs. Greene Return to was a vast surprize to us as to miss Airey I conjecture he[r] whimsical mother sent these Gentlemen up after her. – my Lucy acted herself and acted right in not returning to this place – It is a happiness and the greatest happiness for me to be with you, but to be under a continual uneasiness on account of your safety is what You would not wish – as to Mrs. G. husband being happy to see her in all times and in all places & much mistaken if it would not have di[s]abled him from the service whether he had not have rather lost his arm than have seen her here at this time – he was over here at the time she arriv’d and would not beleive she was coming untill he saw her – Genl Putnam ask’d her if she had ever read Betsey Thoutghtely, – [struck: other Gentlemen] other people may view the light in a different manner from me – But we must stand and fall by our own opinion and not by theirs – The peace of this Town and [inserted: of] the safety [strikeout] Safety of the Ladies is upon the most precarious tenor imaginable – The enemy at farthist not more than three quarters of an hours sail from us, and if they should come of a dark night not more possibly than ten minutes before we must be in action – Think my dear Lucy of ten minutes to get your carriage tuck’d to get [on] and dress yourself and get out of Town in a dark night not knowing whether to go not knowing the road the Carri[a]ge as likely as not oversetting & my dear Girl fright’d to death – add her heavenly Gift the sweet babe to it & the very view would be insupportable, the reality would kill me – You say the enemy are landed on Staten Island waiting a reinforcement, what security have we of this? by the best accounts they are 10,000, and the reinforcement may be in to day – The eyes of all America are upon us, – the matters which we are to act are of infinitely high import as we play our part posterity will bless or curse us – and my dear it will be no common blessing or cursing – it will be In the most divine gratitude or the keenest execrations of the heart – As to what you mention of Leaving our dear little pledge at Fairfield I am very certain you could not be serious. – I know not what You will do for a servant I think it must be difficult where you are, if possible I will send you one by the return of Mrs. Green which I think cannot be long – the Ladies tell dismal stories of your Living – you did not go where you were told to – but there were some of you who think you know more than you really do – advice when it comes from Disinterested parties ought to be followed – I am really afraid of one thing. Palfrey tells me he has wrote for his Wife & she is at Fairfield – take not her advice in the present circumstances of things it must be certain she wants to see her husband and he wants to see her because she is a Woman – I don’t mean to say that is solely the reason – besides Wm Palfrey is in very different department from me – he must fly & shall as Mrs Palfrey – they are at a distance from where the action must commence – we are at advanc’d post he is two miles in the rear – a peice of News. a party of [struck: men] Artillery with 212 pounders last Thursday morning shatter’d one of his majestys sloops or tenders so much that the people quitted her – She mounted 14. Guns mostly six pounders – it is reported the enemy have since burnt her – we kill’d a few and wounded some more – the enemy were so supriz’d they de[illegible]’d very little spirit – we also have had another shooting match at the ships as they come [text loss] narrows we like to have killd [inserted: a] Capt [inserted: of one of] [text loss] shot away his bed from under him and kill’d a number of his people – write me my love as often as lays in Your power and beleive me to have no other Earthly love but you

Kiss and bless your babe for me –

remember me to Mrs P[illegible]
I live at the house – I don’t like Mrs. A.
I have turn’d Packard away – I think he must have cheated you in his market account
most egregiously.

Read the document introduction and the transcript and then apply your knowledge of American history to answer the following questions:

Additional research: Examine the role Henry Knox played in the Revolutionary War and why he came to be a most trusted associate of George Washington.