A Spotlight on a Primary Source by Herbert Hoover 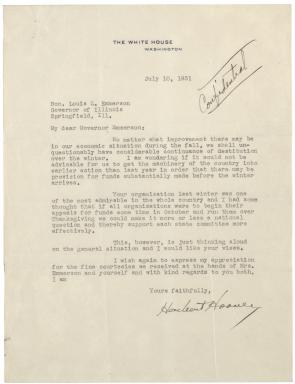 The stock market crashed on Thursday, October 24, 1929, less than eight months into Herbert Hoover’s presidency. Most experts, including Hoover, thought the crash was part of a passing recession. By July 1931, when the President wrote this letter to a friend, Governor Louis Emmerson of Illinois, it had become clear that excessive speculation and a worldwide economic slowdown had plunged America into the midst of a Great Depression. While Hoover wrote to Emmerson that "considerable continuance of destitution over the winter" and perhaps longer was unavoidable, he was trying to "get machinery of the country into . . . action." Since the crash, Hoover had worked ceaselessly trying to fix the economy. He founded government agencies, encouraged labor harmony, supported local aid for public works, fostered cooperation between government and business in order to stabilize prices, and struggled to balance the budget. His work focused on indirect relief from individual states and the private sector, as reflected in this letter’s emphasis on "support[ing] each state committee more effectively" and volunteerism—"appeal[ing] for funds" from outside the government.

As the Depression became worse, however, calls grew for increased federal intervention and spending. But Hoover refused to involve the federal government in forcing fixed prices, controlling businesses, or manipulating the value of the currency, all of which he felt were steps towards socialism. He was inclined to give indirect aid to banks or local public works projects, but he refused to use federal money for direct aid to citizens, believing the dole would weaken public morale. Instead, he focused on volunteerism to raise money. Hoover’s opponents painted him as uncaring toward the common citizen, even though he was in fact a philanthropist and a progressive before becoming president. During his reelection campaign, Hoover tried to convince Americans that the measures they were calling for might seem to help in the short term, but would be ruinous in the long run. He asserted that he cared for common Americans too much to destroy the country’s foundations with deficits and socialist institutions. He was soundly defeated by Franklin D. Roosevelt in 1932.

Roosevelt promised Americans a "New Deal" when he took office, and during his first "Hundred Days" as president, he signed a number of groundbreaking new laws. Roosevelt’s aides later admitted that most New Deal agencies were closely modeled on those that Hoover had attempted, but Roosevelt’s plans differed in financing and scope. New Deal bills supported direct federal aid, tightened government control over many industries, and eschewed volunteerism in favor of deficit spending, all in the hopes of jump starting both consumer confidence and the economy.

In a letter to a friend written seven months after he left office, Hoover expressed his fears about the flurry of New Deal legislation. Hoover saw the country already "going sour on the New Deal." He believed revolution inevitable "unless there is a halt" to the fundamental changes in government and the deficit spending. Roosevelt’s reforms had led Americans to "cast off all moorings," and Hoover predicted that the United States would veer dangerously "to the ‘left,’" followed by a reaction leading to "some American interpretation of Hitler or Mussolini." In 1934, after two years out of the public eye, Hoover made these same thoughts public in an article titled "The Challenge to Liberty."

Hoover was correct when he predicted that the role of American government would fundamentally change because of the New Deal.

A full transcript is available for Hoover’s letter to Louis Emmerson.

No matter what improvement there may be in our economic situation during the fall, we shall unquestionably have considerable continuance of destitution over the winter. I am wondering if it would not be advisable for us to get the machinery of the country into earlier action than last year in order that there may be provision for funds substantially made before the winter arrives.

Your organization last winter was one of the most admirable in the whole country and I had some thought that if all organizations were to begin their appeals for funds some time in October and run them over Thanksgiving we could make it more or less a national question and thereby support each state committee more effectively.

This, however, is just thinking aloud on the general situation and I would like your views.

I wish again to express my appreciation for the fine courtesies we received at the hands of Mrs. Emmerson and yourself and with kind regards to you both, I am 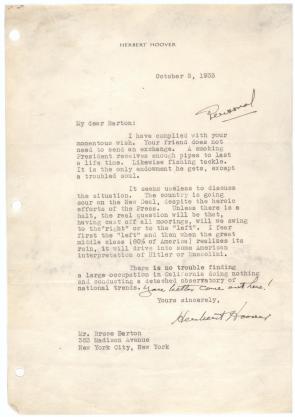 A full transcript is available for Hoover’s letter to Bruce Barton.

I have compiled with your momentous wish. Your friend does not need to send an exchange. A smoking President receives enough pipes to last a life time. Likewise fishing tackle. It is the only endowment he gets, except a troubled soul.

It seems useless to discuss the situation. The country is going sour on the New Deal, despite the heroic efforts of the Press. unless there is a halt, the real question will be that, having cast off all moorings, will we swing to the "right" or to the "left". I fear first the "left" and then when the great middle class (80% of America) realizes its ruin, it will drive into some American interpretation of Hitler or Mussolini.

There is no trouble finding a large occupation in California doing nothing and conducting a detached observatory of national trends.

You better come out here!