A Spotlight on a Primary Source by Samuel Wood 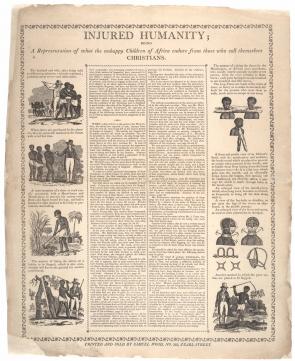 Originally circulated in 1805 to educate the public about the treatment of slaves, this broadside, entitled "Injured Humanity," continues to inform twenty-first-century audiences of the true horrors of slavery. As evidenced by this document, early abolitionists decried the slave trade before it was abolished by an 1807 act of Congress. "Injured Humanity" was intended to shock readers and called on the conscience of citizens to "reject, with horror, the smallest participation in such infernal transactions." This broadside was printed in New York City by Samuel Wood, a prolific Quaker-reformist printer. The text refers to a the publication of An Abstract of the Evidence Delivered before a Select Committee of the House of Commons in the Years 1790 and 1791; on the Part of the Petitioners for the Abolition of the Slave-Trade (London: James Phillips, 1791). The descriptions of the slave trade and treatment of slaves are brought to life by seven strikingly vivid vignettes depicting slaves being whipped, sold, tortured, and separated from their families.

Read the document introduction and transcript, closely examine the enlarged image, and apply your knowledge of American history in order to answer these questions.