"I love you but hate slavery": Frederick Douglass to his former owner, Hugh Auld, ca. 1860

A Spotlight on a Primary Source by Frederick Douglass 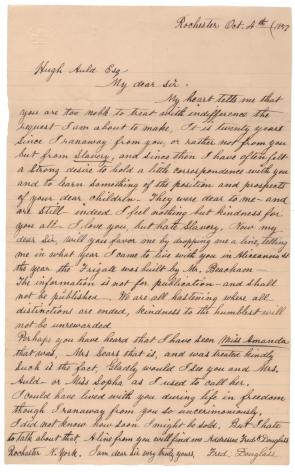 Following his escape from slavery in Maryland to freedom in New York City in 1838, Frederick Douglass became a leader of the abolition movement and its best-known orator. His book Autobiography of an American Slave became a best seller and exposed the horrors of slavery. In this letter dated October 4, [ca. 1860], Douglass wrote to his former master expressing the desire to learn more about his own childhood and the children with whom he grew up. This letter also reflects Douglass’s capacity for forgiveness and is part of his lifelong quest, shared by all slaves, to establish his own history and know when his birthday was and who his parents and siblings were.

In an extraordinary display of forgiveness, Douglass writes to Hugh Auld, his former master: "I love you, but hate slavery."

Hugh Auld Esq
My dear Sir.
My heart tells me that you are too noble to treat with indifference the request I am about to make, It is twenty years since I ran away from you, or rather not from you but from Slavery, and since then I have often felt a strong desire to hold a little correspondence with you and to learn something of the position and prospects of your dear children. They were dear to me – and are still – indeed I feel nothing but kindness for you all – I love you, but hate Slavery, Now my dear Sir, will you favor me by dropping me a line, telling me in what year I came to live with you in Aliceanna St. the year the Frigate was built by Mr. Beacham. The information is not for publication – and shall not be published. We are all hastening where all distinctions are ended, kindness to the humblest will not be unrewarded

Perhaps you have heard that I have seen Miss Amanda that was, Mrs. Sears that is, and was treated kindly such is the fact, Gladly would I see you and Mrs. Auld – or Miss Sopha as I used to call her. I could have lived with you during life in freedom though I ran away from you so unceremoniously,  I did not know how soon I might be sold. But I hate to talk about that. A line from you will find me Addressed FredK Douglass Rochester N. York. I am dear sir very truly yours. Fred: Douglass