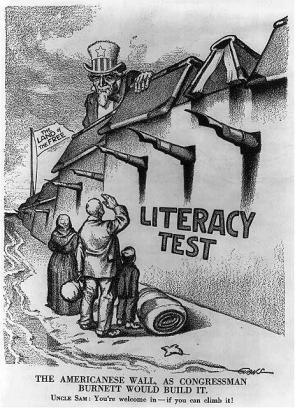 This political cartoon appeared as the nation debated new restrictions on immigration. After 1917, immigrants entering the United States had to pass a literacy test. In the cartoon, the literacy test appears as an insurmountable barrier to a family of immigrants. Uncle Sam peers out over the barrier, a flag behind him ironically proclaiming "the land of the free." The law foreshadowed the 1924 National Origins Act, which ended the years of mass immigration.