Indian Wars: The Battle of Washita, 1868

A Spotlight on a Primary Source by George Custer 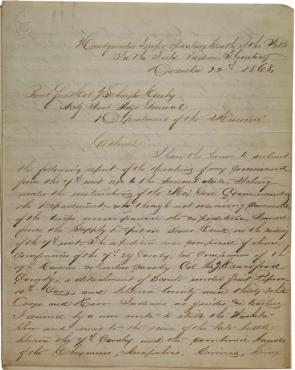 The Battle of Washita on November 27, 1868, pitted US Army troops commanded by General George Custer against the Southern Cheyenne. An excerpt from Custer’s report on a return to the battlefield ten days later is presented here. The Cheyenne at Black Kettle’s village were slaughtered, and the casualties on both sides were gruesome—men stabbed through with shotgun barrels, Cheyenne women and children clubbed to death. Custer described the “stark, stiff, naked and horribly mutilated bodies of our dead Comrades,” and claimed that “Squaws and Children . . . had been slain in the excitement and confusion of the first charge.” The Indian Wars on the plains would continue until the 1890s.

I proceeded to the battle field, early on the morning of the 11th. Indians had evidently paid a hurried visit to the scene of the late Conflict. The bodies of nearly all the warriors killed in the [struck: late] fight had been concealed or removed while those of the Squaws and Children, who had been slain in the excitement and confusion of the first charge as well as in self defense were wrapped in Blankets and bound with [lariats] preparatory to removal and burial. Many of the Indian dogs were still found in the vicinity lately occupied by the lodges of their owners; they probably [3] subsisting on the bodies of the ponies that had been killed and then covered several acres of ground near by. As ten days had then elapsed since the battle and scores of Indian bodies still remained unburied or unconcealed some idea may be had of the precipitate haste - with which the Indians abandoned that section of country. A thorough examination of the immediate battle ground failed to discover any thing worthy of special report, except that Indian bodies were found which had [inserted: not] previously been reported in my first dispatch, and which went to prove, what we are all aware of now, that the enemy’s loss in killed warriors far exceeded the numbers (103) one hundred and three) first reported by me.

Read the document introduction and transcript, view the images, and apply your knowledge of American history in order to answer the questions that follow. (This discussion is recommended for AP/IB/Honors level classes.)