"Jefferson is in every view less dangerous than Burr": Hamilton on the election of 1800

A Spotlight on a Primary Source by Alexander Hamilton 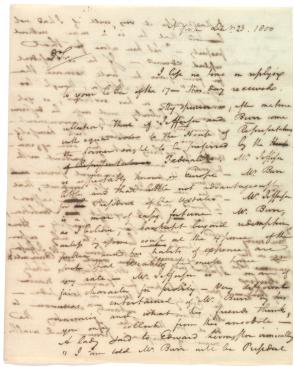 The presidential election of 1800 had resulted in a tie between the two Democratic Republicans, Thomas Jefferson and Aaron Burr. The founders had not foreseen the rise of political parties and the effects that development would have on the operations of the Electoral College. As that body was created at the Constitution Convention of 1787, each elector had two votes to cast and had to cast his votes for different individuals. The candidate receiving the highest number would become president; the candidate with the second highest number would become vice president. (Only after the adoption of the Twelfth Amendment in 1804 did electors vote separately and specifically for president and vice president.)

The presidential election of 1800 provided Alexander Hamilton, former secretary of the treasury, with a dilemma: a tie between Thomas Jefferson, a man whose principles were in direct opposition to Hamilton's own, and Aaron Burr, a man Hamilton believed to have no principles at all. As the House of Representatives prepared to vote to break the deadlock, Hamilton conducted a furious letter-writing campaign to urge fellow Federalists to vote for Jefferson. In this letter to Harrison Gray Otis, a Massachusetts Congressman, Hamilton writes that "In a choice of Evils let them take the least – Jefferson is in every view less dangerous than Burr."

Mr. Jefferson, though too revolutionary in his notions, is yet a lover of liberty and will be desirous of something like orderly Government – Mr. Burr loves nothing but himself – thinks of nothing but his own aggrandizement – and will be content with nothing short of permanent power [struck: and] in his own hands – No compact, that he should make with any [struck: other] passion in his [struck: own] breast except [struck: his] Ambition, could be relied upon by himself – How then should we be able to rely upon any agreement with him?  Mr. Jefferson, I suspect will not dare much Mr. Burr will [inserted in margin: dare every thing in the sanguine hope of effecting every thing –]