A Spotlight on a Primary Source by John Quincy Adams 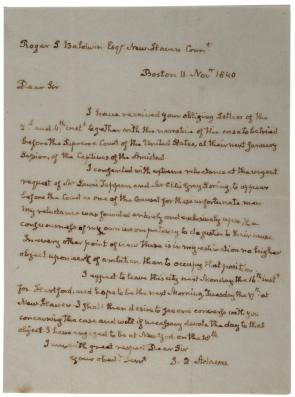 On July 1, 1839, fifty-three Africans, recently kidnapped into slavery in Sierra Leone and sold at a Havana slave market, revolted on board the schooner Amistad. They killed the captain and other crew and ordered the two Spaniards who had purchased them to sail them back to Africa. Instead, the ship was seized off Long Island by a US revenue cutter on August 24, 1839. The Amistad was then landed in New London, Connecticut, where the American revenue cutter’s captain filed for salvage rights to the Amistad’s cargo of Africans. The two Spaniards claimed ownership themselves, while Spanish authorities demanded the Africans be extradited to Cuba and tried for murder.

Connecticut jailed the Africans and charged them with murder. The slave trade had been outlawed in the United States since 1808, but the institution of slavery itself thrived in the South. The Amistad case entered the federal courts and caught the nation’s attention. The murder charges against the Amistad captives were quickly dropped, but they remained in custody as the legal focus turned to the property rights claimed by various parties. President Martin Van Buren issued an order of extradition, per Spain’s wishes, but the New Haven federal court’s decision preempted the return of the captives to Cuba. The court ruled that no one owned the Africans because they had been illegally enslaved and transported to the New World. The Van Buren administration appealed the decision, and the case came before the US Supreme Court in January 1841.

Abolitionists enlisted former US president John Quincy Adams to represent the Amistad captives’ petition for freedom before the Supreme Court. Adams, then a 73-year-old US congressman from Massachusetts, had in recent years fought tirelessly against Congress’s “gag rule” banning anti-slavery petitions. Here, Adams accepted the job of representing the Amistad captives, hoping he would “do justice to their cause.” Adams spoke before the Court for nine hours and succeeded in moving the majority to decide in favor of freeing the captives once and for all. The Court ordered the thirty surviving captives (the others had died at sea or in jail) returned to their home in Sierra Leone.

I have received your obliging Letters of the 2d. and 4th: inst[an]t together with the narrative of the case to be tried before the Supreme Court of the United States, at their next January session, of the Captives of the Amistad.

I consented with extreme reluctance at the urgent request of Mr. Lewis Tappan and Mr. Ellis Gray Loring, to appear before the Court as one of the Counsel for these unfortunate men. My reluctance was founded entirely and exclusively upon the consciousness of my own incompetency to do justice to their cause. In every other point of view there is in my estimation no higher object upon earth of ambition than to occupy that position.