A Spotlight on a Primary Source by Martin, Johnson & Co. 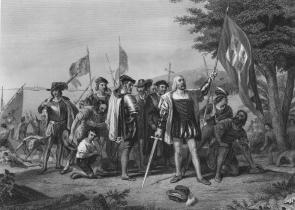 This engraving depicts Columbus’s first landing in the New World, on the island he called San Salvador, on October 12, 1492. Columbus is surrounded by his men on the beach. Discussing the landing in his journal, Columbus wrote that he "leaped on shore, and . . . took, possession of the said island for the King and for the Queen."[1] In the engraving, he holds a sword in one hand and the royal banner of Aragon and Castile in the other, declaring the discovery for Spain. To the side, Native Americans watch the Europeans from behind a tree. In his journal, Columbus recorded that they "asked us if we had come from heaven" and called them "the best people in the world, and the gentlest."[2] He also, however, made note of his plan to "with force . . . subjugate the whole island."[3]

This engraving, by H. B. Hall, is based on an oil painting by John Vanderlyn. Vanderlyn (1775–1852) was an American neoclassicist painter from Kingston, New York. In 1836, Vanderlyn was commissioned by Congress to paint The Landing of Columbus. A commission of that caliber was both a boon to an artist’s standing and an opportunity to create an enduring historical image, and the painting would prove to be one of Vanderlyn’s most well-known works. He completed the painting in 1846, and it was mounted in the Rotunda of the Capitol in 1847. Vanderlyn’s portrayal soon appeared in advertisements, on postage stamps in 1869 and 1893, and on currency in the 1870s. Viewed by thousands in the Capitol and by countless more in various incarnations, The Landing of Columbus came to be the prevailing representation in the American imagination of Columbus’s discovery of the New World.

Read the introduction and study the image before answering the following questions: