Lucy Knox on the home front during the Revolutionary War, 1777

A Spotlight on a Primary Source by Lucy Knox 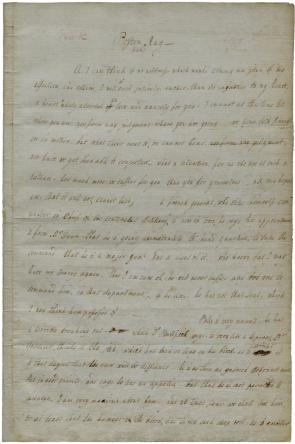 Like many others before and after her, Lucy Knox performed a continuous juggling act as a busy wife and mother. Born into an aristocratic family, she had the advantage of a good education. At the age of seventeen she was disowned by her family when she married Henry Knox, her merchant-class suitor. Due to her heightened involvement as a patriot in Revolutionary America, Lucy faced challenges beyond the typical home front duties, making her a unique witness to history. She was not reluctant to discuss affairs of state in a frank and forthright manner with her husband. Henry quickly climbed the military ranks to become chief of artillery in the Continental Army, and thus a key player in the war.

In this letter to her husband, Lucy described local unrest, including the arrest of Boston men suspected of holding Tory sentiments and the involvement of the local mob in Revolutionary politics. She also reports on the high cost of goods, noting that "the price of every thing is so exorbitant indeed it is difficult to get the necessarys of life here." While remaining alert to political and military affairs, she simultaneously tended to the needs of her family and dealt with hardship. Of thirteen children born to the Knoxes, only three lived beyond infancy. Lucy let her vulnerability show as she wrote of her anxiety about providing for the health and welfare of the family while her husband was in the field. In her case, the demanding position of wife and mother came with the consciousness that the eyes of future generations would be on her, her husband, and her contemporaries as they forged a new Republic.

As I can think of no address which would convey an idea of my affection and esteem, I will omit intirely, rather than do injustice to my heart, a heart wholy absorbed in love and anxiety for you – I cannot at this time tell where you are nor form any judgment where you are going – we hear both Armys are in motion, but what thier rout is, we cannot hear. nor have we yet been able to conjecture – what a situation, for us who are at such a distance – how much more we suffer for you than you for yourselves – all my hopes are that it will not, cannot last . . .

Billy is very unwell – he has a terrible breaking out which Dr [Bullfich] says is very like a leprosy, Dr Gardiner thinks it the itch, which has lain so long in his blood, as to corrupt it to that degree that the cure will be difficult – he is as thin as gabriel Johonnot now but in good spirits, and says he has an appetite – but that he is not permitted to indulge. I am very anxious about him, and at times fear we shall lose him, or at least that the humour in the blood, has taken such deep root as to embitter his future days – this will be handed you by Capt Searjent who will also deliver you your box of  pickles – I have got seven yards of linnen for breeches for you, am affraid to have it made up here, for fear it should be spoiled, as it cost twenty shillings pr yard – sure there must be a tailor in morristown  . . . the price of every thing is so exorbitant indeed it is difficult to get the necessarys of life here, at any price – the evil increases daily – beef is at eaight pence a pound if you will take half an ox neck, shins, and all you may get it for seven pence – for butter we give two shillings a pound . . . this and the behaviour of our town meeting has almost made me a tory – will you believe me when I tell you that old Mr Erving is among the number who they have passed a vote to confine in close jail untill they can determine what farther is to be done with them – this upon the suspicion of thier  being torys – I do not mean to blame them for ridding themselves of those persons – who in case of an attack, would take a part against them, but there meddling with that old gentleman who has been superannated this ten years can be from no other motive but to share his estate – the Colonels – Crafts, Revere& Sears are the three leading men of the place – the first of these motioned to dissolve the meeting, and lett the people revenge their own cause – quite milatary was it not – in short the mob have so much the upper hand at present . . .

Read the document introduction and transcript in order to answer the following questions.