The New York Conspiracy of 1741

A Spotlight on a Primary Source by Daniel Horsmanden 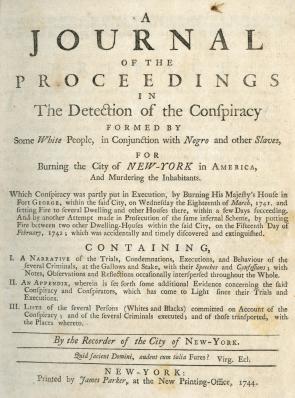 In New York City in 1741 an economic decline exacerbated conflict between enslaved men and women engaged in commercial activity and working-class White colonists who felt their jobs were threatened. This tension boiled over in the spring when a series of fires led White New Yorkers to fear an uprising of enslaved people. Even Fort George in lower Manhattan was burned to the ground. The events became popularly known as the New York Conspiracy of 1741 (also called the Negro Plot or the Slave Insurrection). Nearly 200 people were arrested, including at least twenty Whites, some of whom were suspected of being Catholic saboteurs and spies.

The accused were tried by Judge Daniel Horsmanden, an ambitious British expatriate who turned the proceedings into a Salem-like witch hunt. Much of the evidence was based on the dubious testimony of a sixteen-year-old Irish indentured servant who was promised a considerable reward for her cooperation. Many times during the deliberations Mary Burton was known to “remember” certain facts only when pressed hard enough. The conspiracy was reported as a plot to take over the city government by White ringleaders, assisted by enslaved people who were promised their freedom.

Despite criticism of the validity of the evidence, Horsmanden ordered executions. In total, thirty to forty enslaved people were either hanged or burned at the stake while four Whites were hanged, including John Ury, accused as an undercover Catholic priest and agent for Spain, and John Hughson, Mary Burton’s master. In addition, countless enslaved people and White colonists were deported. In Horsmanden’s conclusion to the case, published in A Journal of the Proceedings in the Detection of the Conspiracy Formed by Some White People, in Conjunction with Negro and Other Slaves (1744), he wrote that divine intervention led to the plot’s exposure and ultimate failure, although “we have not been able entirely to unravel the Mystery of this Iniquity; for ’twas a dark Design, and the Veil is in some Measure still upon it!”

The Recorder taking Notice of the several Fires which had lately happened in this City, and the Manner of them, which had put the Inhabitants into the utmost Consternation; that every one that reflected on the Circumstances attending them, the Frequency of them, and the Causes yet undiscovered; must necessarily conclude, that they were occasioned and set on Foot by some Villainous Confederacy of latent Enemies amongst us . . . it was “Ordered, That this Board request his Honour the Lieutenant-Governor to issue a Proclamation, offering a Reward to any white Person that should discover any Person or Persons lately concerned in setting Fire to any Dwelling House or Storehouse in this City (so that such Person or Persons be convicted thereof,) the Sum of One Hundred Pounds, Current Money of this Province; and that such Person shall be pardoned, if concerned therein: And any Slave that should make Discovery, to be manumitted, or made free; and the Master of such Slave to receive Twenty-Five Pounds therefore; and the Slave to receive, besides his Freedom, the Sum of Twenty Pounds, and to be pardoned; and if a Free Negro, Mulatto, or Indian, to receive Forty-Five Pounds, and also to be pardoned, if concerned therein.”

. . . when the first Grand Jury drew near their Discharge, they were importunate with Burton, to discover all the Persons she knew to be engaged in this villainous Design; for about this Time she had suggested to some, that there were White People of more than ordinary Rank above the Vulgar, that were concerned, whom if she told of, they would not believe her . . . ’til for the last Experiment, she was told, she must expect to be imprisoned in the Dungeon, if she continued obstinate; she then began to open, and named several Persons which she said she had seen at Hughson’s amongst the Conspirators, talking of the Conspiracy, who were engaged in it; amongst whom she mentioned several of known Credit, Fortunes, and Reputations, and of Religious Principles superior to a Suspicion of being concerned in such detestable Practices; at which the Judges were very much astonished. . . .

Read the introduction and view the images of the Journal of the Proceedings conducted by Judge Daniel Horsmanden. The pages included here are the title page, the first page of the Introduction, the “list of white persons taken into custody,” the “list of negroes committed,” and the final two pages of the Conclusion. Then apply your knowledge of American history as well as the text of the documents to answer the following questions: