A Spotlight on a Primary Source by William Travis 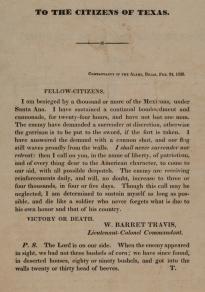 A decade of conflict between the Mexican government and US settlers in Texas culminated in 1836 with the siege of the Alamo and the Texas Declaration of Independence. On February 23, 1836, Lieutenant Colonel William Travis, Jim Bowie, and approximately 145 Texan rebels were in San Antonio, Texas, when several thousand Mexican troops began to advance on the town. They had the opportunity to retreat to safety, but Travis chose to secure his forces inside the Alamo, an old Spanish mission, and sent riders carrying a plea for reinforcements. In this letter addressed “To the Citizens of Texas,” Travis describes the repeated attacks by the Mexican army:

I am besieged by a thousand or more of the Mexicans, under Santa Ana. I have sustained a continual bombardment and cannonade, for twenty-four hours, and have not lost one man. The enemy have demanded a surrender at discretion, otherwise the garrison is to be put to the sword, if the fort is taken. I have answered the demand with a cannon shot, and our flag still waves proudly from the walls. I shall never surrender nor retreat: then I call on you, in the name of liberty, of patriotism, and of every thing dear to the American character, to come to our aid, with all possible despatch.

On March 2, the same day Texas declared its independence from Mexico, thirty-two volunteers advanced through enemy lines to help defend the Alamo. Four days later, Mexican forces stormed the garrison from all sides. Travis and his men were able to beat back two assaults, but at last the Mexicans breached the walls of the Alamo and killed all of the Texas defenders. News of Santa Anna’s victory spread quickly through Texas, and “Remember the Alamo” became the battle cry that soon led Texas to victory at San Jacinto on April 21.

Read the introduction and examine the image. Then apply your knowledge of American history to answer the following questions: