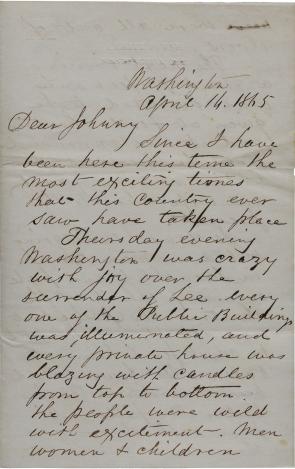 At 10:13 p.m. on Good Friday, April 14, 1865, while attending a play at Ford’s Theatre in Washington DC, President Abraham Lincoln was shot in the back of the head by John Wilkes Booth. Lincoln, unconscious and bleeding, was rushed across the street to a nearby house. Though doctors tended to Lincoln throughout the night, his wound proved fatal. The “Great Emancipator” died at 7:22 a.m. on April 15.

The assassination of Lincoln was part of a wider plot that included the deaths of the vice president and the secretary of state. The man who intended to kill Andrew Johnson did not go through with the plan, but Lewis Powell got into William Seward’s home and slashed his face before escaping.

This letter from Colonel John B. Stonehouse to his son, Johnny, captures the turmoil in Washington DC as news of the attacks spread across the city. Stonehouse was staying at the Ebbitt House, a hotel near Seward’s home and the White House.

Just as I was going to bed a man ran in breathless and pale enquiring which of the Theatres the President was attending – ‘he said he must find him at once as Mr. Seward had been murdered in his bed – We followed him to the door and there met people rushing from the Theatre saying the “President is shot, “the President is murdered” such a time I never before beheld and never want to again

Just as I got to Fords Theatre they were carrying the President to a house across the street. he did not move or speak after he was shot –

A pdf of the complete transcript is available here.

Read the introduction and study Colonel John Stonehouse’s letter. Then apply your knowledge of American history and evidence from the letter to answer the following questions:

A printer-friendly pdf is available here.