The Province of Massachusetts Bay requests aid from Queen Anne, 1708

A Spotlight on a Primary Source by Thomas Oliver 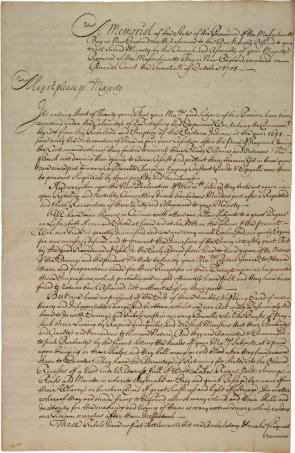 Queen Anne’s War (1702–1713) was the second of four great wars for empire fought among France and England and their Indian allies. This struggle broke out when the French raided English settlements on the New England frontier. Fighting then spread south, where English colonists in the Carolinas attacked Spanish territory in Florida. An English invasion of Quebec in 1710 failed, but in the Treaty of Utrecht ending the conflict, France ceded Newfoundland, Nova Scotia, and the French territory around Hudson Bay to England, and abandoned its claim to sovereignty over the Iroquois.

In this memorial to Queen Anne in 1708, the Massachusetts colonists recounted the many economic losses they had suffered during the twenty years of warfare. They also suggested that the only way to combat the Indians, who had a different style of fighting than the colonists, was to enlist “the service of the Mohawks, and other Nations of the Western Indians that are in Friendship and Covenant with you.”

It’s nothing short of Twenty years, That your Ma.tys good Subjects of this Province, have been wasting under the Calamity’s of a Distressing and Expensive War, taking the Commencem:t thereof from the Rebellion and Eruption of the Eastern Indians in the year 1688. - save onely the Intervention of Three or four years Cessation after the peace of Reyswick, during the Continuance whereof they forbore to commit their Bloody Villanies and Outrages. The french not dareing then openly to Avow, Assist and protect them therein, Yet in those years we were put to a very Considerable Charge, in keeping Constant Guards & Espyalls over them to prevent Surprizals by their perfidy and Treachery’s -

And very Soon upon the New Declaration of War wth. france, they broke out again, in open Rebelion and hostility, Committing divers barbarous Murders, just after a Repeated and fresh Recognition of their Duty and Allegiance to your Majesty -

We have been sharers in Common with other our fellow Subjects to a great Degree in Losses, both of men and Estate, at home and at Sea, both in the former & the present War, our Trade is greatly diminished, and we are very much Exhausted; our yearly Expence for our necessary defence, and to prevent the Incursions of the Enemy is vastly great. But by the good Providence of God, In the Early Advice from time to time given, of the Motions of the Enemy, and the prudent Methods taken by your Ma:tys Captain General; to Observe them, and preparations made for their Reception in their Descents upon us, has prevented those Impressions, which probably we might otherwise have felt, and they have been forced to Return back Ashamed, not without Loss on their part. -

But we have no prospect of the End of these Troubles, & of being Eased of our heavy and Insupportable Charge and burthen, whilst we can Act only Defensively, and have to do with Enemy’s and Rebels within our very Bowells.

Read the introduction and transcript and examine the document image in order to answer the following questions.