Ratification of the US Constitution in New York, 1788

A Spotlight on a Primary Source by Constitutional ConventionGeorge Washington 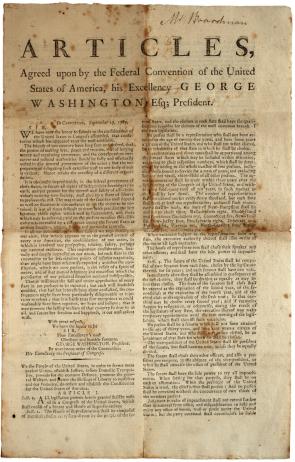 This unique copy of the US Constitution was printed by Claxton and Babcock in Albany, New York, between February 11 and March 21, 1788. Copies of the Constitution were widely distributed following the document’s signing by the members of the Constitutional Convention on September 17, 1787, and six states had already ratified it. So why was this late printing even undertaken?

The answer lies in New York’s ratification process and the struggle between the Anti-Federalist contingent, led by Governor George Clinton, and the Federalists, led by Alexander Hamilton, the only New York member of the Constitutional Convention to have signed the Constitution. As the election of delegates to the statewide ratification convention planned for April 29, 1788, drew near, it was necessary to provide the general public with copies of the Constitution. In the April 7, 1788, issue of The Federalist Herald (also published by Claxton and Babcock) an editorial marked the local distribution of what is most likely this copy of the Constitution: "Before their arrival, you might here behold the honest, uninformed (or rather misinformed) peasantry almost ready to fight that MONSTER, the Constitution; — but, happy event! Their fears are daily vanishing — and their political sentiments are quite different from what they were while kept in the dark."

In this broadside, George Washington’s letter of transmittal to the Confederation Congress, typically printed following the text of the Constitution in such publications, precedes the text in this version. Reminding his readers to rise above partisan politics for the greater good of the country, Washington, as president of the Constitutional Convention, wrote that "the constitution, which we now present, is the result of a spirit of amity" and expressed his wish "that it may promote the lasting welfare of that country so dear to us all, and secure her freedom and happiness." Read in this light, this printing of the Constitution can be seen as a last-minute offensive by the Federalists to garner support for the proposed government, specifically in Albany and Montgomery Counties.

The New York ratification convention met in mid-June 1788. The Anti-Federalists clamored for a Bill of Rights and fought to preserve the autonomy of the state against federal encroachments. Hamilton and the Federalists contended that a stronger central government would provide a solid base from which New York could grow and prosper. While the debates were contentious, the Federalists were ultimately successful in bringing New York into the nationalist camp. The Anti-Federalists, however, managed to attach a list of proposed additions that had to be considered before New York would fully participate in the new government.

George Washington’s letter of transmittal of the US Constitution to Congress, page 1.

WE have now the honor to submit to the consideration of the United States in Congress assembled, that constitution which has appeared to us the most advisable. . . .

It is obviously impracticable in the federal government of these states; to secure all rights of independent sovereignty to each, and yet provide for the interest and safety of all—Individuals entering into society, must give up a share of liberty to preserve the rest. The magnitude of the sacrifice must depend as well on situation & circumstance as on the object to be obtained. It is at all times difficult to draw with precision the line between those rights which must be surrendered, and those which may be reserved; and on the present occasion this difficulty was encreased by a difference among the several states as to their situation, extent, habits and particular interests. . . .

That it will meet the full and entire approbation of every state is not perhaps to be expected; but each will doubtless consider, that had her interests been alone consulted, the consequences might have been particularly disagreeable or injurious to others; that it is liable to as few exceptions as could reasonably have been expected, we hope and believe; that it may promote the lasting welfare of that country so dear to us all, and secure her freedom and happiness, is our most ardent wish.