Robert E. Lee’s message to his troops before the Battle of Spotsylvania, 1864

A Spotlight on a Primary Source by Robert E. Lee 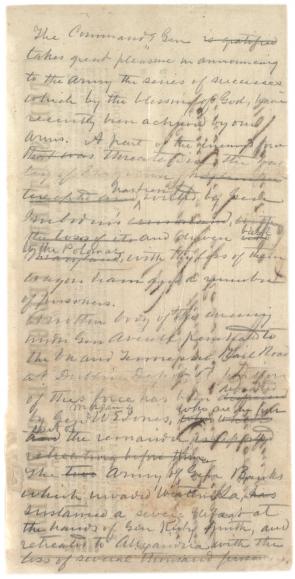 Just after the devastating fighting in Virginia at the Battle of the Wilderness and prior to the Battle of Spotsylvania in 1864, Confederate General Robert E. Lee drafted this inspirational message to his troops on the back of a telegram from John D. Imboden. The address reminds his soldiers of the recent victories of other Confederate forces, rallies them around their country’s cause, and imbues them with a sense of mission: "Some of our bravest officers and men have fallen, but their comrades not less brave will emulate their glorious examples." Lee made sure the men knew that they were fighting for the survival of a nation and a people, and stated that any temptation to desert the Confederate cause was also a temptation to desert one’s family, friends, and compatriots. His speech, which provided solace for those who had endured three years of death and suffering, is reminiscent of Abraham Lincoln’s Gettysburg Address. In November 1863, President Lincoln had transformed the Union war effort with that historic oration. Lee would have been familiar with the text, as it was widely published in the nation’s newspapers. The final paragraph in Lee’s message closely echoes the conclusion of the Gettysburg Address. Gilder Lehrman Institute’s draft of Lee’s speech shows the many edits he made. These revisions are a testament to Lee’s struggle to find exactly the right words to comfort his soldiers and the Confederate nation.

Lee’s message was not well received in the North, where the New York Times printed an editorial on May 23, 1864, blasting Lee for lying about the progress of the war. While the draft in the Gilder Lehrman Collection is undated, the New York Times article states that the address was issued on May 14, 1864.

The Commandg Gen [struck: is gratified] takes great pleasure in announcing to the Army the series of successes which by the blessing of God, have recently been achieved by our Arms. . . . The [inserted: heroic] valor [struck: and] of this Army, under the blessing of Almighty God has thus far [struck: off] checked the progress of the principal Army of the enemy towards Richmond, and inflicted [inserted: upon it] heavy loss [struck: upon it]. [struck: The eyes of] Your country [struck: illegible are illegible] looks to you in your [struck: noble] gallant struggle with confidence and hope. Encouraged by the successes that have been vouchsafed to us, stimulated by the great interests that depend upon the issue, and sustained by prayers of [struck: the dear ones] [inserted: those] in whose defense you fight, let every man resolve to put forth his utmost efforts, to endure all and brave all, until by the assistance of a just and merciful God [struck: a as success shall crown] the enemy shall be driven back and [struck: a speedy] peace [struck: be] secured to our country.

[struck: Some of our bravist [sic] officers & men Many of your brave comrades] have fallen, [struck: but they have left (inserted: a durable) the example of their glorious sacrifice to]

Some of our bravest officers and men have fallen, [struck: Let their ex] but their [inserted: surviving] comrades not less brave will emulate their glorious examples, and Continue to emulate the valor of your brave comrades who have fallen [illegible phrase] that it [struck: rests with the] [inserted: depends on] you to see that they [struck: shall not] [inserted: shall not] have died in vain. With the blessing of God, it is in your power to defeat the last great effort of the enemy, secure [struck: safety and] independence to your native land, and earn for yourselves the [inserted: lasting] love and gratitude of your country men, and the admiration of [struck: the world] [inserted: mankind.] [struck: Let your effects be worthy of]

Read the document introduction and transcript in order to answer these questions. You may also wish to consult a battlefield map of the Civil War.