A Spotlight on a Primary Source by Robert F. Kennedy 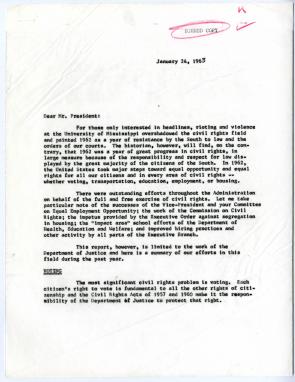 At the end of 1962, President John F. Kennedy asked his brother, Attorney General Robert Kennedy, to compile a report on the Civil Rights enforcement activities of the Justice Department over the previous year. In this report, submitted on January 24, 1963, Robert Kennedy notes "progress" overall, but reminds the President that difficult race problems remain "not only in the South . . . but throughout the country."

Though the year was marked by the deadly riots at the University of Mississippi over the admittance of a black student, Kennedy maintains a sense of optimism and hope for the future. He calls 1962 "a year of great progress in civil rights, in large measure because of the responsibility and respect for law displayed by the great majority of the citizens of the South." He does not deny, however, that many difficult problems remain, and he cites the disregard of voting rights and regulations in some southern states as a continuing problem desperately in need of reform.

Kennedy also notes progress made in African American employment and the desegregation of schools and public transportation. For these gains he credits the increasing cooperation of the southern people and calls this "the emerging spirit of the South." Evident throughout his report is his faith that the people and the government of the United States will be able to accomplish their objectives through persistence and compassion. The report reflects the true purpose of the Civil Rights Movement: to fight racism and apathy in order to enact positive change and ultimately gain equal rights.

A full transcript is available

In summary, 1962 was a year of progress for the United States in the field of civil rights. This is not to say the problems are disappearing. They remain, and they remain difficult – not only in the South, with open discrimination, but throughout the country where Negroes are the victims of school "resegregation", bias in housing, or employment, or other facets of society. Ugly incidents like the Mississippi riot may occur again.

But we are accelerating our progress. Again, let me say this acceleration occurs in large measure because of the emerging spirit of the South. In 1962 this spirit was not the brutal one of rioting and violence at the University of Mississippi. The spirit was that exemplified in Georgia last week by Governor Carl E. Sanders, in his inaugural address.

"We revere the past," he said. "We adhere to the values of respectability and responsibility which constitute our tradition." Then he added, "We believe in law and order and in the principle that all laws apply equally to all citizens."