A Spotlight on a Primary Source by John White 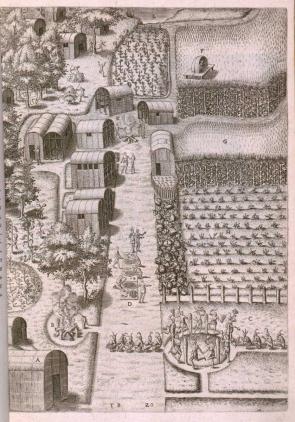 In the 1570s and 1580s, John White served as an artist and mapmaker to several expeditions around the Carolinas. White made numerous watercolor sketches depicting the Algonquian people and stunning American landscapes. This engraving of Secotan, an Algonquian village on the Pamlico River in present-day North Carolina, is based on a drawing made by John White in July 1585. The artist depicted an agrarian town without defensive fences or stockades. The image was printed in the 1590 edition of Thomas Harriot’s A Briefe and True Report of the New Found Land of Virginia. The key that accompanies the engraving identifies (A) a charnel house "wherin are the tombes of their kings and princes"; (B) a place for prayers; (C) a dance ground; a place to meet after celebrations; (E) two fields of tobacco; (F) a hut where guards are posted to keep birds and animals away from the corn; (G) a field of ripe maize and (H) a field of newly planted maize; (I) a garden of pumpkins; (K) a place for a fire during "solemne feasts"; and (L) a nearby river that supplied water to the village.

In 1587, White became governor of England’s first attempt at colonization, an ill-fated settlement on Roanoke Island, known to history as "the Lost Colony." White’s daughter Eleanor gave birth to the first English child born in the New World, Virginia Dare, in August 1587. However, a shortage of supplies forced White to return to England later that year for more provisions. The Spanish Armada prevented White from returning to Roanoke until 1590. By the time he got back, his colony, daughter, and granddaughter had disappeared into the wilderness, leaving the name of a nearby island, "CROATOAN," carved into a tree as the only clue to their fate. The ship’s captain refused to take White to Croatoan to search for the colonists. White’s paintings greatly influenced European attitudes toward the North American coast and provide an important source of information about the Roanoke voyages and European views of Native Americans.

Read the introduction and study the image before answering the following questions: