A secret agreement between pirate hunters, 1696

A Spotlight on a Primary Source by Robert Livingston, William Kidd, and Richard Blackham 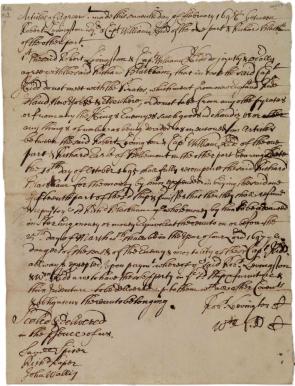 Maritime trade and exploration in the colonial era created an environment ripe for piracy. One of the most famous pirates in history, Captain William Kidd, was commissioned by William III of England in 1695 as a privateer to hunt and capture pirates. Robert Livingston of New York engineered the arrangement, in which Kidd and Livingston were to receive a 10 percent share of the profits recovered from any treasure obtained from pirates. Privateers would turn over a tenth of their treasure to the king, a third to the Admiralty for doing the paperwork, and the remainder to the investors who would pay the crew and divide the rest among themselves.

In this document Livingston and Kidd enter into a separate agreement with an unsavory merchant named Richard Blackham. Each sold one third of their shares to Blackham in exchange for money "by him to be advanced in Sterling money or money Equivalent thereunto" to relieve Kidd of debt and to raise funds that were needed prior to Kidd’s departure. This arrangement was highly unorthodox and was entered into unbeknownst to the king or the Admiralty.

Kidd operated as a privateer for several months before his own actions bordered on piracy and the king ordered his arrest. When word spread that Kidd was suspected of piracy, Livingston feared that their plan would be revealed and he too would be implicated. Parliament, on their part, did everything in its power to keep word from spreading that the king and Admiralty took any part in a gun-for-hire operation. Four years later, as Kidd headed to Boston from the Caribbean, Livingston informed the lieutenant governor of New York that Kidd was carrying treasure. Kidd was captured and sent to England for trial. He was executed in May 1701.

Articles of Agreemt. made this seaventh day of February 1695/6 between Robert Livingston Esqr. & Capt. Williame Kidd of the one part & Richard Blackham of the other part.

1st. The said Robert Livingston & Capt. William Kidd do joyntly & sevally agree with the said Richard Blackham, that in case the said Capt. Kidd do not meet with the Pirates, which went from new England Rode Island, New Yorke & Elsewhere, or do not take from any of the pyrates or from any the Kings Enemyes such goods mchandizes or [struck: other] any things of value as being devided as mentoned in Articles between the said Robert Livingston & Capt. William Kidd of the one part & Richard Earle of Bellomont on the other part bearing Date the 10th day of October 1695 shall fully recompense the said Richard Blackham for the money by him expended in buying the said one fifteenth part of the sd. Ship & primisses that thou they shall refund & repay to ye sd. Richard Blackham ye whole money by him to be advanced in Sterling money or money Equivalent thereunto on or before the 25th. day of March wch shall be in the year of our Lord 1697 ye dangers of the seas & of the Enemy & mortality of the sd. Capt. Kidd allways excepted, upon paymt whereof ye said Robt. Livingston & Wm. Kidd are to have the sole pperty in ye sd. Ship & furniture & this Indenture to be delivered up to them wth all other Covents & obligations thereunto belonging.

Read the document introduction and transcript in order to answer the following questions.