Sergeant Francis Fletcher of the 54th Massachusetts on equal pay for Black soldiers, 1864

A Spotlight on a Primary Source by Francis Fletcher 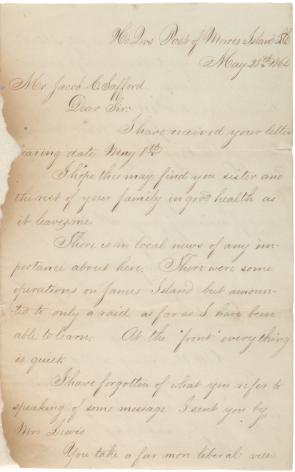 Francis H. Fletcher, a 22-year-old clerk from Salem, Massachusetts, enlisted as a private in Company A of the 54th Massachusetts Infantry Regiment on February 13, 1863. One year after the regiment left Boston with great fanfare, Fetcher wrote to his friend Jacob C. Safford regarding the discrimination and hardships Black soldiers encountered when they were denied the same pay as White soldiers.

The 54th Massachusetts is famous for steadfastly refusing the government pay of $7 per month instead of the $13 per month paid to White soldiers. Abolitionists and Black leaders opposed the inequality in pay. After many delays, Congress finally passed a bill to equalize pay for Black Union soldiers on June 15, 1864. In September 1864 the men of the 54th Massachusetts were retroactively paid in full for their eighteen months of service. Written two weeks before the passage of the congressional bill, Fletcher’s letter expresses his resentment clearly and eloquently:

You take a far more liberal view of things than you could in my situation. Just one year ago to day our regt was received in Boston with almost an ovation, and at 5 P. M. it will be one year since we were safely on board transport clear of Battery Wharf and bound to this Department: in that one year no man of our regiment has received a cent of monthly pay all through the glaring perfidy of the U.S. Gov’t.

I cannot any more condemn nor recite our wrongs, but console myself that One who is able has said vengeance is mine and I will repay.

All the misery and degradation suffered in our regiment by its members’ families is not atoned for by the passage of the bill for equal pay.

Fletcher served in the 54th Massachusetts until the regiment disbanded at the end of the war. He was promoted to sergeant, the highest rank a Black soldier could achieve at the time, and mustered out of service on August 20, 1865, in Mount Pleasant, South Carolina. Jacob C. Safford from Ipswich, Massachusetts, is listed as "black" on the draft rolls, but there is no record of him serving in the Army.

Read the document introduction and transcript and apply your knowledge of American history as well as evidence from the document in order to answer these questions.