A Spotlight on a Primary Source by Isham G. Bailey 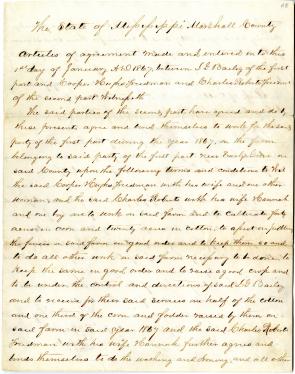 Immediately after the Civil War, many former slaves established subsistence farms on land that had been abandoned by fleeing white Southerners. President Andrew Johnson, a Democrat and a former slaveholder, soon restored this land to its white owners, reducing many freed slaves to economic dependency on the South’s old planter class.

The freedmen, who wanted autonomy and independence, refused to sign contracts that required gang labor, and sharecropping emerged as a compromise. Landowners divided plantations into 20- to 50-acre plots suitable for farming by a single family. In exchange for the use of land, a cabin, and supplies, sharecroppers agreed to raise a cash crop and give a portion, usually 50 percent, of the crop to their landlord. Landowners extended credit to sharecroppers to buy goods and charged high interest rates, sometimes as high as 70 percent a year, creating a system of economic dependence and poverty.

This 1867 contract between landowner Isham G. Bailey in Marshall County, Mississippi, and two freedmen stipulates different arrangements for each man’s family. Both Charles Roberts and Cooper Hughs were to raise cotton and corn and give more than half of the cotton and two-thirds of the corn they raised to Bailey, but the Roberts family was to receive 487 pounds of meat to the Hughs family’s 550 pounds. Additionally, Charles Roberts and his wife agreed to do housework for an additional $50 a year, while the Hughs family agreed to tend the livestock for no additional compensation.

As a symbol of their newly won independence, freedmen had teams of mules drag their former slave cabins away from the slave quarters into their own fields. Wives and daughters sharply reduced their labor in the fields and instead devoted more time to home and childcare. But the exploitative sharecropping system also helped ensure that the South’s economy became almost entirely dependent on a single crop—cotton—and an increasing number of Southerners, white and black, were reduced to tenant farming, working as laborers on land they did not own.

. . . the said Cooper Hughs Freedman with his wife and one other woman, and the said Charles Roberts with his wife Hannah and one boy are to work on said farm and to cultivate forty acres in corn and twenty acres in cotton, to assist in putting the fences on said farm in good order and to keep them so and to do all other work on said farm necessary to be done to keep the same in good order and to raise a good crop and to be under the control and directions of said IG Bailey and to receive for their said services one half of the cotton and one third of the corn and fodder raised by them on said farm in said year 1867 and the said Charles Roberts Freedman with his wife Hannah further agrees and binds themselves to do the washing and Ironing, and all other necessary house work for said IG Bailey and his family during said year 1867 and to receive for their said services fifty dollars in money at the expiration of said year 1867 and the said Cooper Hughs Freedman further agrees and binds himself to give the necessary attention of feeding the Stock of cattle and milking the cows twice daily belong to said IG Bailey, and do the churning when ever necessary during the said year . . .

Read the document introduction and the transcript and apply your knowledge of American history in order to answer the questions that follow.