A Spotlight on a Primary Source by Stephen Austin 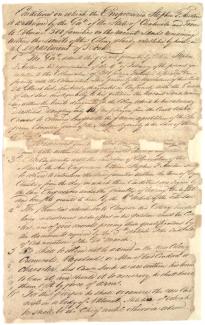 In order to settle Texas in the 1820s, the Mexican government allowed speculators, called empresarios, to acquire large tracts of land if they promised to bring in settlers to populate the region and make it profitable. Moses and Stephen Austin contracted to bring "500 families on the vacant lands remaining within the limits of the colony already established." The contract stipulates that "The families which are to compose this Colony besides being industrious as he offers in his petition must be Cat[ho]lics, and of good morals." Stephen Austin established dozens of communities and brought thousands of settlers into the Mexican province of Texas. While Austin was loyal and committed to the Mexican Republic, by the early 1840s he was leery of the unstable Mexican government and advocated for the independence of Texas.

8th   Official Communications with the Govt. or with the authorities of the State, instruments of writing and other public acts, must be written in Spanish, and when new Towns are formed it shall be his duty to establish Spanish Schools in them.

9      It shall also be his duty to promote the erection of churches in said Towns and that they are provided with ornaments, holy vases and other things necessary for divine worship and in the proper time to solicit the necessary numbers of Pastors for the Adminstration of Spiritual affairs.

Read the document introduction, examine the excerpt and if possible the entire transcript, and apply your knowledge of American history in order to answer the questions that follow.