The surrender of New Netherland, 1664

A Spotlight on a Primary Source by Richard Nicholls 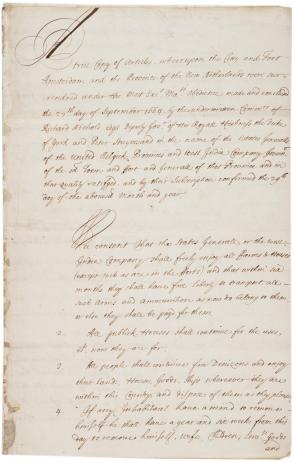 The Dutch colonization of New Netherland (which included parts of present-day New York, Delaware, New Jersey, and Connecticut) began in the 1620s. From the outset, New Netherland was a multiethnic, multireligious society: about half of the population was Dutch and the remainder included French, Germans, Scandinavians, and small numbers of Jews from Brazil. Settlers were attracted to the colony’s promises of freedom of worship, local self-government, and free land that would remain tax-exempt for ten years.

Between 1652 and 1674, the Dutch and English fought three naval wars, battling for supremacy in shipping and trade. England’s Charles II promised New Netherland to his brother, James, Duke of York. In May 1664 James dispatched Colonel Richard Nicolls [or Nichols] to seize the colony. Three hundred soldiers from four warships went ashore on Long Island in August and moved west to Brooklyn, enlisting support from the English towns on Long Island and distributing handbills ahead of the advancing troops offering fair treatment for those who surrendered.

Nicolls approached Peter Stuyvesant, the Dutch governor of New Netherland, promising that in return for surrender the settlers would “peaceably enjoy whatsoever God’s blessing and their own honest industry have furnished them with and all other privileges with his majesty’s English subjects.” Stuyvesant, who favored resistance, tried to convince New Amsterdam’s merchants and leaders to keep news of Nicolls’s lenient surrender terms secret. They balked, and Stuyvesant was forced to surrender the colony, though under terms that he, the merchants, and leaders agreed upon with Nicolls.

The “Articles, Whereupon the Citty and Fort Amsterdam and the Province of the New Netherlands Were Surrendered” were remarkably generous. The Dutch were allowed to stay on their land, religious freedom was upheld, and the pubs stayed open. These terms, coupled with New Netherland’s multiculturalism, had a lasting impact on the character of New York City.

Wee consent that the States Generall, or the West India Company shall freely enjoy all ffarms & Houses (except such as are in the fforts) and that within six months they shall have free Liberty to transport, all such arms and ammunition as now do belong to them, or else they shall be payd for them.
2. All publick Houses shall continue for the uses, wch. now they are for.
3. All people shall continue free Denizons and enjoy their Lands, Houses, Goods, Ships, wherever they are within this Country, and dispose of them as they please.
4. If any Inhabitant have a mind to remove himself he shall have a year and six weeks from this day to remove himself, Wife, Children, Servts. Goods and to dispose of his Land here.
5. If any officer of State of publick Minister of State have a mind to go for England they shall be transported fraught free in His Ma.t’s ffriggatts, when those ffriggats shall returne thither.
6. It is consented to, that any people may freely come from the Netherlands and plant in this Country; and that Dutch Vessells may freely come hither, and any of the Dutch may freely return home, or send any sort of Merchandises home in Vessells of their own Country.
7. All ships from the Netherlands or any other places, and goods therin, shall be received here & sent hence, after the manner, wch. formerly they were before our coming hither for six months next ensuing.
8. The Dutch here shall enjoy their Liberty of their Consciences in Divine Worship and Church Dissipline.
9. No Dutchman here or Dutch Ship here shall upon any occasion be prest to serve in Warr against any Nation whatsoever.
10. That the Townesman of the Manhattoo shall not have any Soldiers quartered upon them wth.out being satisfied and payd for them, by their officers, and that at this present, if the ffort be not capable of lodging all the Soldiers, then the Burge Master by His officers shall appoint some House capable to re[illegible]e them.
11. The Dutch here shall enjoy their own Customes concerning their Inheritances.
12. All publick writings and Records wch. Concerns the Inheritances of any people, or the Regulment of the Church or Poor or Orphans shall bee carefully kept by them in whose hands now they are, and such writings as particularly concern the states generall all may att any time be sent to them.
13. No Judgement that hath passed any Judicature here shall be called in question, but if any conceive that he hath not had Justice done him, if hee apply himself to the states Generall, the other party shall bee bound to answer for the supposed Injury.
14. If any Dutch living here shall att any time desire to travell or traffique into England or any place or Plantation in obedience to His Maty of England, or with the Indians he shall have (upon his Request to the Govr.) a Certificate that he is a free Denizon of this Place, and Liberty to do so . . .