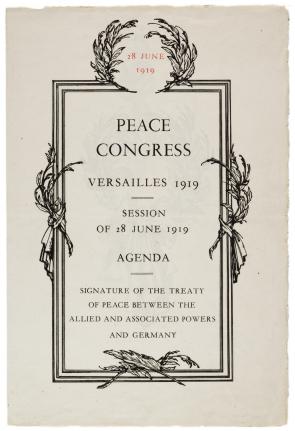 The treaty would largely come to be seen as a failure for Wilson, however. Congress, concerned about conceding individual power in order to become a member of the League of Nations, refused to ratify it. Wilson had been the driving force behind the League of Nations, and while the other signatories of the treaty embraced the League, American isolationism quashed enthusiasm for it at home. This press statement, released as Wilson left office in 1921 by William Gibbs McAdoo—who was both Wilson’s son-in-law and his treasury secretary—defends the President’s handling of the Treaty of Versailles. McAdoo argued that Wilson had "laid the foundations of world peace and a new order" and made a "matchless contribution to his time" in the treaty. "Whatever may be the imperfections of the Treaty from a political or economic standpoint," McAdoo wrote, "Woodrow Wilson did not fail."

I do not agree with those who hastily and inconsiderately adjudge the President’s work at the Peace Conference a failure. Whatever may be the imperfections of the Treaty from a political or economic standpoint, Woodrow Wilson did not fail. The outstanding thing for which he fought, the thing that transcends political and economic considerations, is the permanent peace of the world. Unless this is secured all else is failure; without this the sublimest hope of humanity is sunk in the black abyss; without this all political and economic adjustments are unstable and sooner or later will disappear.

Read the document introduction and the transcript excerpt and view the images. Then apply your knowledge of American history in order to answer the questions that follow.