Two versions of the Preamble to the Constitution, 1787

A Spotlight on a Primary Source by Constitutional Convention

On May 25, 1787, the fifty-five delegates to the Constitutional Convention began meeting in a room, no bigger than a large schoolroom, in Philadelphia’s State House. They posted sentries at the doors and windows to keep their "secrets from flying out." They barred the press and public, and took a vow not to reveal to anyone the words spoken there. There were speeches of two, three, and four hours. The convention, which lasted four months, took only a single eleven-day break. 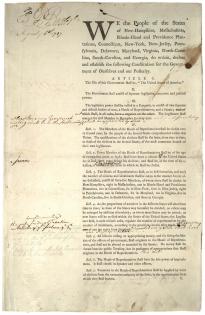 First draft of the United States Constitution, with notes by Pierce Butler, August 6, 1787

This copy of the draft of the Constitution was printed secretly for the delegates in August 1787. In order to make it easier for them to take notes it was printed with wide margins. Delegate Pierce Butler, one of the wealthiest slaveholders from South Carolina, owned and marked up this copy.

A full transcript of Butler's copy of the first draft is available. 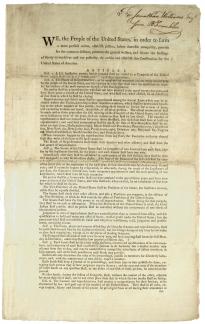 First printing of the official United States Constitution, for members of the Constitutional Convention, inscribed by Benjamin Franklin to Jonathan Williams, September 17, 1787

The first official printed version of the Constitution was distributed to the delegates, among whom Benjamin Franklin, aged 81, was the senior member.

The preamble of the working draft and the final version differ significantly. In the August 6 preamble, delegates described themselves as representatives of "the States of New-Hampshire, Massachusetts, Rhode-Island," etc. The final version, beginning "We the People of the United States," shows that in the six weeks between the writing of the draft and of the final version, the idea of a united nation had been born. A single nation with a unified government had replaced an earlier vision of a confederation of states.

Read the document introduction and transcript and apply your knowledge of American history in order to answer these questions. It may also be helpful to do additional research.