A Spotlight on a Primary Source by James W. C. Pennington 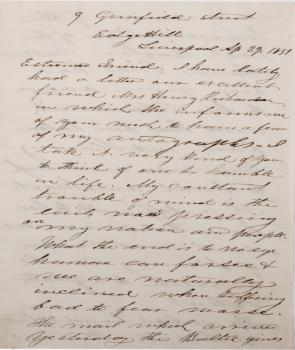 "The whole land is full of blood."

These ominous words were uttered by James W. C. Pennington, a former slave and noted abolitionist, in the wake of Thomas Sims’s infamous trial. Sims had escaped from slavery in Georgia before being captured in Massachusetts in April 1851 and taken to court under the Fugitive Slave Law of 1850. The judge decided in favor of Sims’s owner, and the seventeen-year-old was marched through the streets of Boston by US marines before being returned to Georgia. The authoritarian nature and public spectacle of Sims’s case sent a resounding message to slaves who sought refuge in the North. It also inflamed anti-slavery sentiment, spurring many abolitionists to action.

Pennington could closely sympathize with the plight of Thomas Sims. In 1827 he had escaped from slavery in Maryland. Pennington traveled first to Pennsylvania before settling in Brooklyn, New York, where he worked as a blacksmith while attending night classes. Since Yale would not enroll him as a regular student, he audited courses in Yale’s School of Divinity and obtained his ordination and license to preach in 1838. Pennington’s achievements as a scholar and an abolitionist were remarkable. He is noted for establishing an argument for the African origins of western European civilization and is also known for presiding as minister over Frederick Douglass’s marriage to Anna Murray. In this letter, Pennington offers us a glimpse into the frustrating struggle for abolition at a time when fugitive slave laws provoked pivotal court rulings. In his words, "These cases are enough to break one’s heart. It is difficult to see how the enormous evil and crime of Slavery can be carried to a greater extent."

Esteemed Friend, I have lately had a letter our excellent friend Mrs Henry Richardson, in which she informs me of your wish to have a few of my autographs—I take it very kind of you to think of one so humble in life. My constant trouble of mind is the evils now pressing on my nation and people. What the end is to no eye human can forsee & we are naturally inclined when suffering bad to fear worse. The mail which arrived yesterday the Baltic gives an account of the termination of the last Boston case. Thomas Sims has been given over to his Claimant and has been taken back into Slavery. These cases are enough to break one’s heart. It is difficult to see how the enormous evil and crime of Slavery can be carried to a greater extent.

The whole land is full of blood. The cry of the poor is going up from every part of the country into the ears of the Lord of Sabaoth Will he not soon hear and answer; "Lord give us help from trouble"

Read the document introduction and transcript and then apply your knowledge of American history to answer the following questions: