An African American Protests the Fugitive Slave Law: On This Day, December 4

The Compromise of 1850 included the controversial Fugitive Slave Law that allowed for the seizure of alleged runaway slaves without due process and prohibited any obstruction to their recovery. Escaped slaves living in the North became fearful of capture and many moved to Canada. 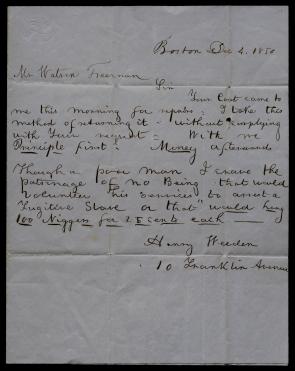 Following the passage of the Fugitive Slave Law, the Underground Railroad became more active, and abolitionists protested the "reign of terror to the colored population." Henry Weeden, a free African American and an abolitionist in Boston, voiced his objection through his business. Weeden was a tailor, and when he received an overcoat in need of repair from a US Marshal charged with enforcing the Fugitive Slave Law, he refused his business and returned the coat. Weeden wrote to the customer that he did "crave the patronage of no Being that would volunteer his services to arrest a Fugitive Slave" and had "take[n] this method of returning [the coat] without complying with Your request."