Elbridge Gerry and the Original Gerrymander 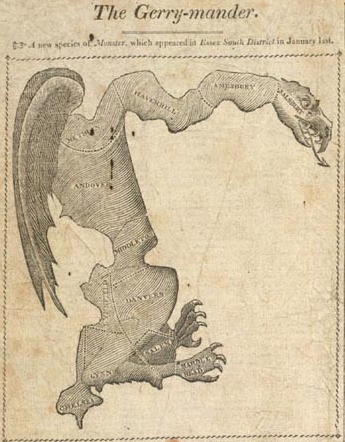 Elbridge Gerry—signer of the Declaration of Independence, member of the Constitutional Convention (follow the links to documents by and about Gerry in the Gilder Lehrman Collection), congressman, diplomat, governor, and vice president—had a distinguished political career, but his legacy largely rests on one word: gerrymander.

Gerrymander refers to the act of manipulating the borders of a voting district to favor one party. This often results in serpentine, labyrinthine districts. The practice of gerrymandering has persisted with no clear rules on what constitutes acceptable versus illegal and overly partisan redistricting. This may change in October, when the US Supreme Court will hear arguments in Gill v. Whitford on the constitutionality of a redrawn district in Wisconsin. But where does the term—and the practice—originate?

Perhaps ironically, Gerry spent most of his political career as a moderate nonpartisan, viewing the growing political divide between Federalists and Democratic-Republicans with distaste and preferring to follow his own principles rather than those of either party. He refused to sign the US Constitution in 1787 on the grounds that it had no bill of rights, and then joined with anti-Federalists to pass the Bill of Rights in Congress. However, he went on to support the economic policies of Federalist Alexander Hamilton and served as a diplomat to France under Federalist president John Adams. It was only after Federalists blamed the  XYZ Affair on Gerry’s actions as a diplomat that he formally joined the Democratic-Republicans.