Food Conservation during WWI: "Food Will Win the War"

When most people think of wartime food rationing, they think of World War II. However, civilians were encouraged to do their part for the war effort during World War I as well. This colorful poster by artist Charles E. Chambers was issued by the United States Food Administration to encourage voluntary food conservation. "Food Will Win the War" was the name of the campaign initiated by the newly appointed head of the agency, Herbert Hoover. Food was necessary not only to feed America’s growing Army, but to help relieve famine in Europe, in part to prevent the overthrow of European governments and the spread of Communism. On April 25, 1919, Hoover wrote: "Of course, the prime objective of the United States in undertaking the fight against famine in Europe is to save the lives of starving people. The secondary object, however, and of hardly less importance, [is] to defeat Anarchy, which is the handmaiden of Hunger." 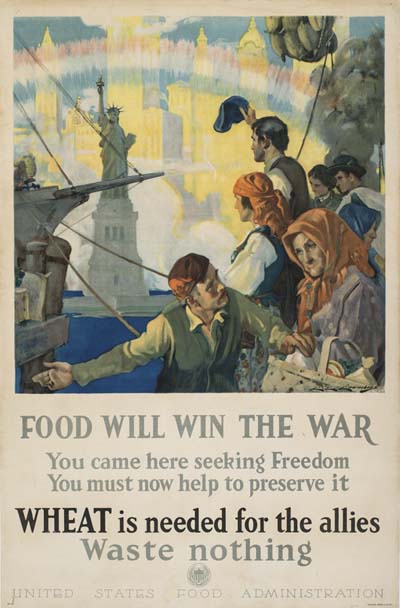 This poster, recently acquired by the Gilder Lehrman Collection, calls on immigrants to do their part in the war effort. It depicts recent immigrants standing near a sailing ship with the Statue of Liberty and a rainbow stretched across the New York City skyline in the background. The text reads:

You came here seeking Freedom.
You must now help preserve it.
Wheat is needed by the allies.
Waste nothing.

Though this poster focuses on the conservation of wheat, other food categories such as corn, barley, meat, and vegetables were no less important. In order to effectively reach immigrant populations, the poster was also produced in Yiddish, Italian, Spanish, and Hungarian. Using the incentives of price and patriotism, the United States was successful in its mission to feed the Allies.

This poster is one of four recent additions to the Gilder Lehrman Collection’s World War I holdings. In total these holdings consist of approximately 200 letters, documents, and photographs. They range from official letters and correspondence, a nurse’s diary, soldiers’ letters, and an undated George Washington Carver leaflet, "The Sweet Potato as a Flour Substitute."