Fredericksburg, Then and Now

One would think that growing up in a town rich in colonial and Civil War history would inspire an appreciation for that history. My experience living in Fredericksburg, Virginia, was quite the opposite. Fredericksburg’s history as a home for the Algonquian-speaking peoples, a port city in colonial Virginia, and a strategic location during the Civil War was all around me. However, I became desensitized due to numerous field trips to battlefields; constant references to George Washington and his mother, Mary; and my apathetic attitude toward anything that makes my hometown significant. It wasn’t until I came across in the Gilder Lehrman Collection a photograph of dead Confederate soldiers behind the stone wall at Marye’s Heights that the history became real. The photograph brought out the significance everyone had always mentioned about Fredericksburg, but it wasn’t until I started comparing the past to the present that I once again fell in love with Fredericksburg, Virginia.

For two years Fredericksburg and its residents were engulfed by the American Civil War. In November 1862 Union troops arrived and occupied the town. Many of the town’s residents fled into neighboring Spotsylvania County, and thousands of the area’s slaves crossed the Rappahannock River to freedom. The remaining residents got their first taste of war in December 1862. The First Battle of Fredericksburg ravaged the town, empty homes were looted, valuables were taken or destroyed, fighting occurred in the streets. In nearby Marye’s Heights after nightfall, Union troops fled back across the Rappahannock, leaving Fredericksburg with its dead and wounded. Fredericksburg turned into a "City of Hospitals." The war was far from over, especially for the residents of Fredericksburg. Less than six months later fighting returned to the small town. In early May 1863 Union and Confederate forces clashed again at Marye’s Heights. Confederate troops retreated west toward Chancellorsville. 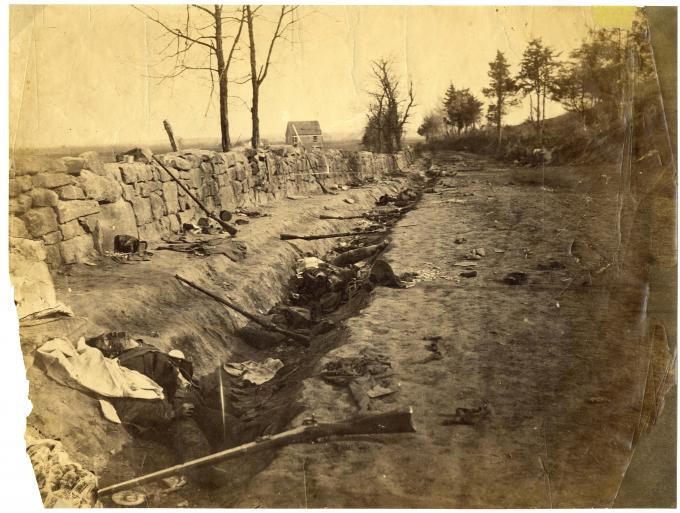 This photograph was the one that broke through my apathy and brought Fredericksburg back to life. The area in Andrew Russell’s photograph of Confederate dead behind the stone wall at Marye’s Heights is walkable today at the Fredericksburg and Spotsylvania National Military Park, Fredericksburg Battlefield site. Most of the wall contained in the photograph was removed after the war, but portions were rebuilt in the 1930s and in 2004.[1] 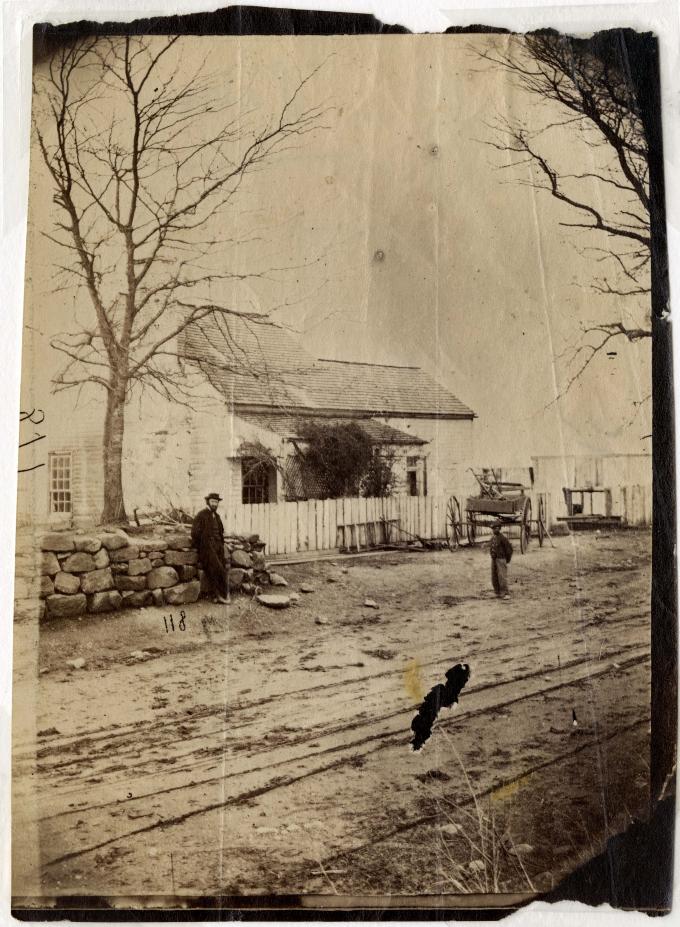 The Stephens (Stevens) House was used as General Thomas Cobb’s and Joseph Kershaw’s headquarters. Cobb was injured in battle and taken to this home, where he passed away shortly after. The Stephens House no longer stands, but one can visit the site where its foundations once stood. 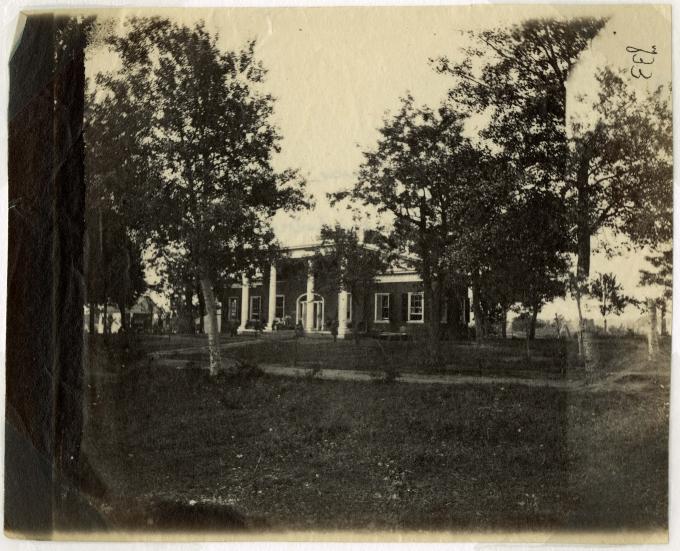 Close to the Sunken Road and Stone Wall is Marye’s house, also known as Brompton, which is situated on Marye’s Heights. The house sustained damage and was used as a field hospital after the Second Battle of Fredericksburg. The property currently serves as a private residence for The University of Mary Washington’s president. 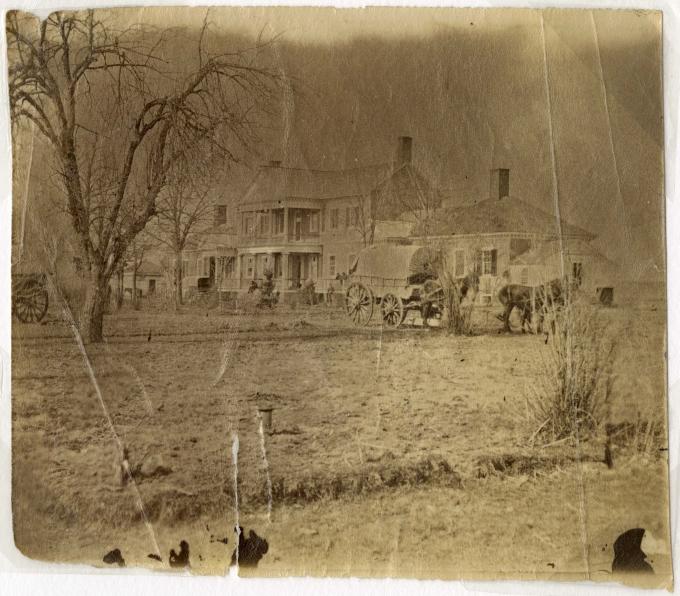 The Lacy House, or Chatham Manor, was occupied by the Union Army in the spring of 1862. Following the First Battle of Fredericksburg the home was used as a hospital for Union troops. The grounds and wood from the home would be used the following winter by Union troops as a base during the Second Battle of Fredericksburg. The house hosted Abraham Lincoln, Walt Whitman, and Clara Barton over the course of  the war. Currently the home is owned by the National Park Service and is part of the Fredericksburg and Spotsylvania Military Park.[2] 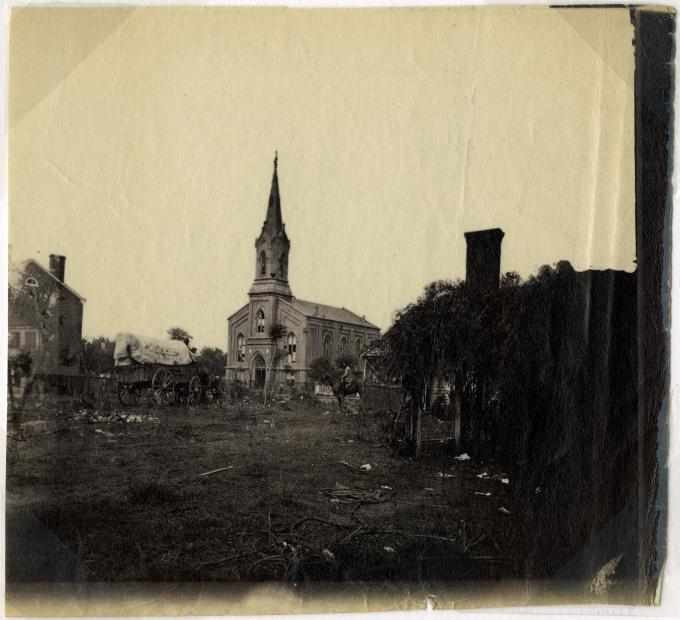 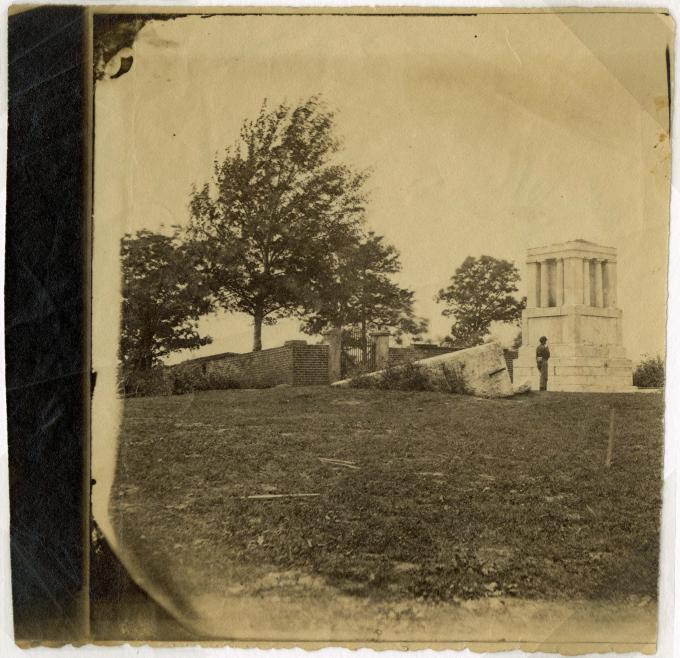 George Washington’s mother, Mary Ball Washington, spent the last portion of her life living in Fredericksburg. In 1833 the Mary Washington Monument was erected but not finished. The photograph shows the monument unfinished and damaged by the war. The monument wouldn't be completed until 1894 when an effort made by women from across the United States raised funds for a new monument to be erected. Today the Mary Washington Monument and its surrounding greenery are open for visitors.[4]

The Fredericksburg area is steeped in history. It only takes a walk around Downtown to find yourself jumping from one period to the next. Fredericksburg, Virginia, is worth a visit for those who haven’t been, and a return for those who have. As for myself, the next time I’m in town I will revisit these spots with different eyes. I’ll remember the images of a town ravaged by war as I gaze upon the vastly changing area. The past is present in Fredericksburg, Virginia.