This month we focus on how students might be inspired by Thomas Paine and his best-known text, Common Sense, which was so important to the spirit of the American Revolution that General Washington ordered it read to the troops for inspiration. 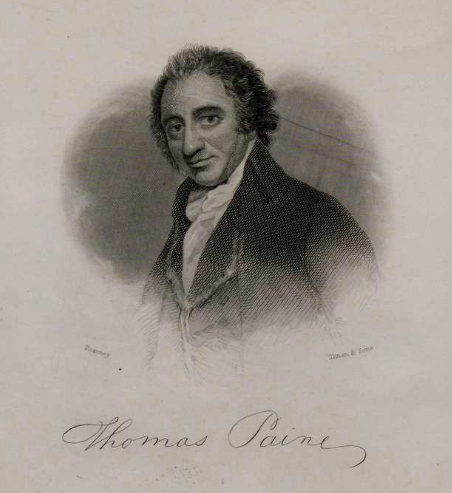 Thomas Paine’s life is the stuff of legend. Born in 1737 and raised in England, he was dismissed from his job as an excise officer in England in 1772 for agitating for higher pay and immigrated to America to launch his career as a radical. Paine was a vehement supporter of the patriot cause and his Common Sense (1776) and sixteen-part series The Crisis (1776–1783) made him one of America’s leading pamphleteers. In 1787 Paine returned to England, where he wrote The Rights of Man (1791–1792), a defense of the French Revolution. His inflammatory writings led to a treason charge in England, and he was forced to flee to Paris. In France, Paine gained a prominent place in political affairs but soon found himself imprisoned by the Jacobins during the Reign of Terror. By the time Paine returned to the United States in 1802, his anti-Biblical work The Age of Reason (1794–1795) and Letter to Washington (1796), which pilloried the President, had rendered him persona non grata in much of America. He died in poverty in 1809.

Read the famous 1776 pamphlets Common Sense and The American Crisis, and a handwritten letter (with transcription) Paine wrote about Benedict Arnold and John Andre in 1780 here.

On January 10, 1776, six months before the adoption of the Declaration of Independence by the Continental Congress, Thomas Paine published his explosive pro-independence pamphlet Common Sense. The pamphlet, which sold one copy for every five people living in the colonies, is famous not only for its revolutionary anti-monarchy message, but for the language with which Paine delivered that message. “I offer nothing more than simple facts, plain arguments, and common sense,” he writes. Paine believed that his argument should be simply put so as many people as possible would read it. The first printing of Common Sense was sold throughout America and Europe. In America it was widely distributed and read publicly.

As Lin-Manuel Miranda was inspired by the writings of Alexander Hamilton, letters written by the Schuyler sisters, and the speeches of George Washington, students working on their EduHam Online projects may be inspired by the story and writings of another fascinating historical figure from the American Revolution, Thomas Paine.

Teachers! If you are about to embark on the Hamilton Education Program Online in the spring, please fill out this survey BEFORE you begin. It is one of the most useful ways of tracking your experience as we constantly seek to improve the program.