Henry Ford Introduces the Minimum Wage: On This Day, January 5 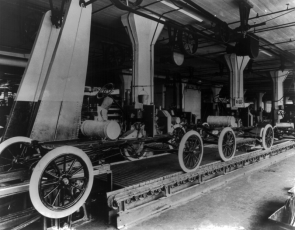 On January 5, 1914, automaker Henry Ford made history by instituting a $5-a-day wage. The move made national news. Five dollars a day constituted double the industry norm—and double the pay of most of Ford’s own employees. At the same time, Ford reduced the working day from nine hours to eight—becoming one of the first companies in America to adopt the 40-hour work week.

Massachusetts set the first statewide minimum wage in 1912 and in the Fair Labor Standards Act of 1938, the federal government set a minimum wage of $.25 per hour for eligible workers—then about 20 percent of the American work force. You can explore the history of federal and state minimum wage rates on the Department of Labor website: History of Federal Minimum Wage Rates and Minimum Wage Laws in the States.

In many ways, Ford’s move in 1914 inspired today’s living-wage movements.