On December 2, 1859, John Brown went to the gallows for his failed raid on the arsenal in Harpers Ferry, Virginia. Brown was a polarizing figure. In the image to the left, based on an incident reported in the New York Tribune that later proved to be apocryphal, he appears almost saintlike. Contrast that portrayal with this wild-eyed portrait by Ole Peter Hansen Balling. 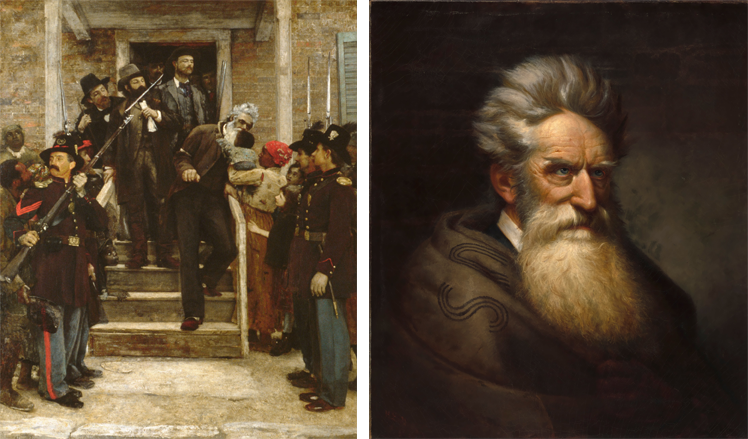 The raid on Harpers Ferry was not Brown’s first foray into slavery-related violence. After the passage of the Kansas-Nebraska Act, supporters of both slavery and free labor flooded into the territory of Kansas, where violence soon erupted. Rival governments of anti-slavery settlers and pro-slavery Missouri transplants battled it out to claim popular sovereignty in favor of their side. In retaliation for the sack of the free-state town of Lawrence on May 21, 1856, the abolitionist John Brown led a brutal attack on a pro-slavery settlement at Pottawatomie Creek. The violence alienated many anti-slavery backers. 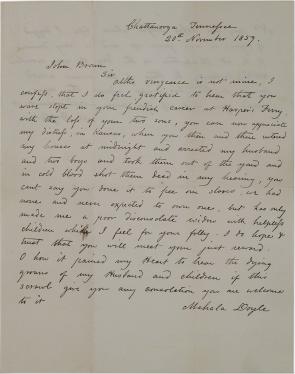 Brown and six followers killed five men, hacking at them with broadswords and cutting their throats before shooting them. Mahala Doyle, the wife and mother of three of Brown’s victims, expressed her bitterness and pain in this letter to John Brown. She sent it to him in November 1859 as he awaited execution after the Harpers Ferry raid. Below is a transcript of her letter.

NB my son John Doyle whose life I begged of (you) is now grown up and is very desirous to be at Charleston on the day of your execution would certainly be there if his means would permit it, that he might adjust the rope around your neck if gov: wise would permit it
M. Doyle.