Jackie Robinson and the Presidents

The Gilder Lehrman Institute of American History has acquired a fascinating collection of correspondence from Presidents Nixon, Eisenhower, and Kennedy to baseball legend and prominent civil rights activist Jackie Robinson.

In a letter dated August 8, 1957, Richard Nixon writes to Robinson about the Senate vote on the Civil Rights Act of 1957, vowing to introduce a more “effective bill than the watered-down version.” In another letter, written by Dwight D. Eisenhower, dated October 7, 1957, the President thanks Robinson for his letter pertaining to desegregation in Little Rock, Arkansas. 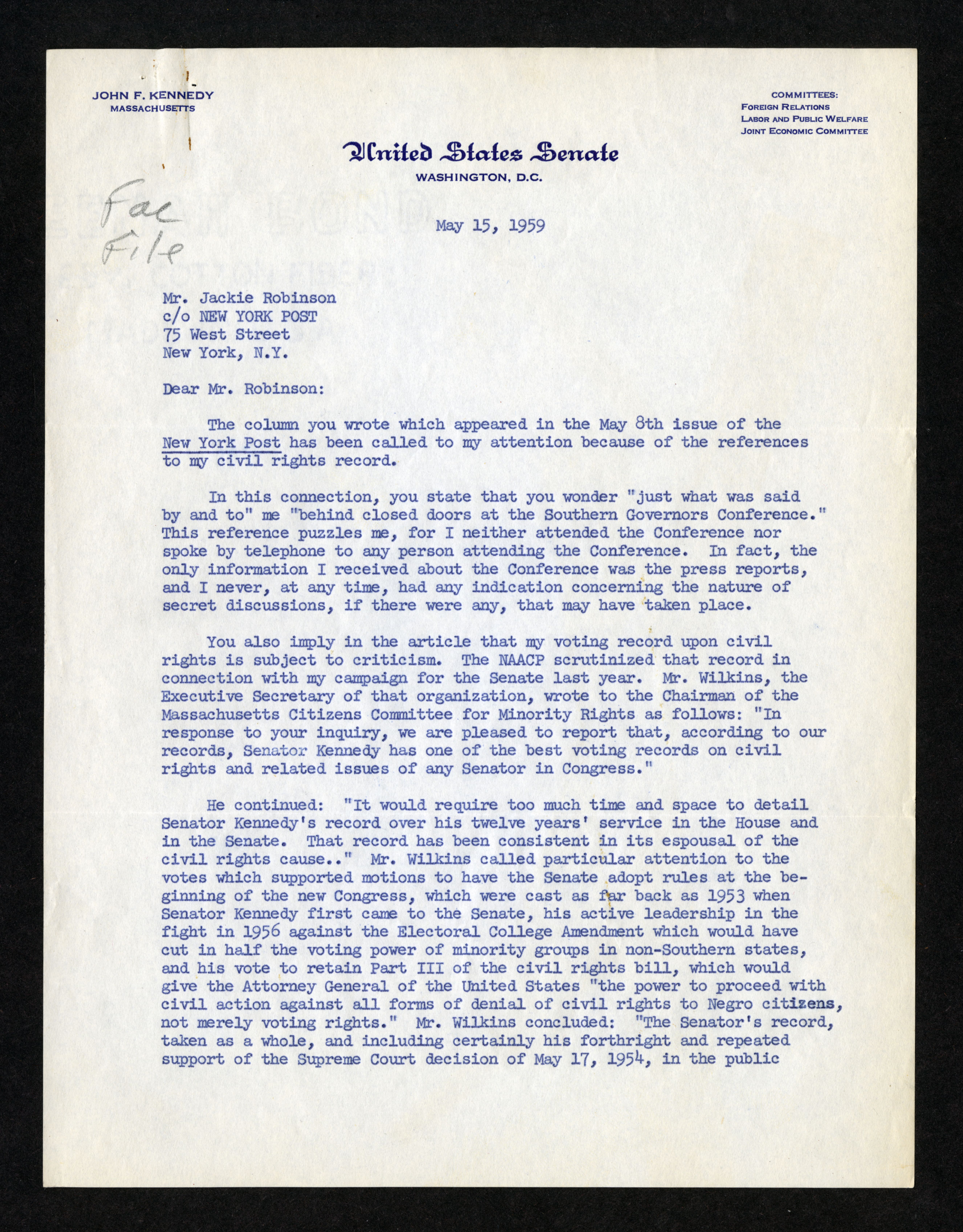 Robinson’s most dynamic presidential relationship was with John F. Kennedy, whom he began the 1960s criticizing, endorsing Richard Nixon over Kennedy in the presidential election of 1960 because Kennedy seemed disinterested in civil rights. Perhaps the most intriguing newly acquired letter comes from candidate Kennedy, who, in May of 1959, writes to Robinson in response to a scathing New York Post column in which he called Kennedy to task for his weak civil rights record and his failure to make direct eye contact with Robinson when they met in person to discuss civil rights. Kennedy’s response made him slip in Robinson’s esteem further: “Foreign policy, farm policy, national defense, labor legislation, and other crucial problems must be weighed along with the stand of a candidate upon civil rights.”

Their relationship evolved over the next two years, encouraged particularly by Robert Kennedy’s continued support of Robinson’s work. In the first of four newly acquired letters from Robert Kennedy to Jackie Robinson, written in May 1961, Robert Kennedy writes: “We intend to follow through with vigorous enforcement of the civil rights laws and I believe we will make progress.”

Two years later, Robinson had changed his position on President Kennedy, whom he had seen make radical strides toward improved civil rights for African Americans, often at Robinson’s direct urging. John Kennedy finally directly addressed the nation in June 1963 on the injustice of segregation and discrimination, saying that the United States “was founded on the principle that all men are created equal, and that the rights of every man are diminished when the rights of one man are threatened”—echoing the words of Martin Luther King Jr.’s “Letter from Birmingham Jail.” Robinson sent a telegram to the White House thanking Kennedy for being “the most forthright President we have ever had and for providing us with the inspired leadership that we so desperately needed.”

This collection of letters from the country’s leaders to Robinson further enriches the Gilder Lehrman Institute’s growing collection of significant civil rights era documents, which are among the most requested by teachers nationwide.