On April 30, 1789, George Washington was sworn in as our nation’s first president. His wife, Martha Washington, was not at his side. Washington had only received the election results two weeks earlier, on April 14, when Secretary of Congress Charles Thomson arrived at Mount Vernon to notify Washington. He left for the temporary national capital, New York City, two days later and arrived on April 23. He traveled through six states, attending celebrations in cities and towns along the route and being greeted by thousands of citizens who lined the roads. Martha, her two grandchildren, and seven house slaves followed him in mid-May. Martha was guardian for both her grandchildren as well as her niece, Fanny Bassett. 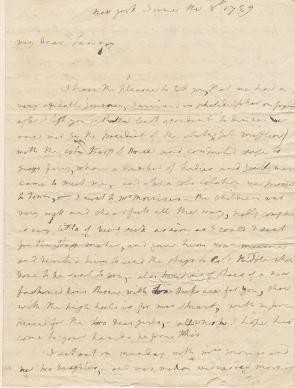 Shortly after her arrival, she wrote this letter to Fanny describing her journey and the details of her family’s adjustment to life in a new city. She concentrates on the things that matter most to her–family. She notes that Nelly traveled well; little Washington was amazed by the parade; she had sent shoes and stays for Fanny; the importance of finding good schools and music lessons; and comments (not appreciatively) on the necessity of keeping up with hairstyles and fashion in the city.

Some have argued that Martha refused to attend the inaugural as a protest, because she did not want her husband to be president and was reluctant to assume the public role of the president’s wife. However, George was equally reluctant to assume the presidency (see George Washington to Henry Knox, April 1, 1789). Perhaps it was too difficult to get the family organized to leave in only two days. Perhaps Martha anticipated the hoopla that would surround her husband’s journey to the capital and did not think it would be a good idea to bring the children on such a trip. 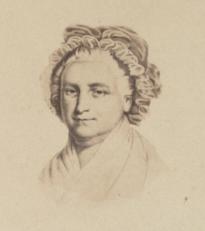 Regardless, this letter is a glimpse into the Washingtons’ family life as they became our First Family. Their experiences probably mirror the experiences of First Families ever since.

Note: During her husband’s tenure as president, Martha Washington was not referred to as the First Lady, but as "Lady Washington" or "our Lady Presidentess." The title of First Lady wouldn’t be officially used until Harriet Lane served as hostess for her uncle, James Buchanan.

I have the pleasure to tell you, that we had a very agreable journey, – I arrived in philadelphia on fryday after I left you without the least accident to dinner we were met by the president of the state, (Gnl Mifflin) with the city troop of Horse and conducted safe to grays ferry, where a number of Ladies and Gentlemen came to meet me, – and after a cold colation we proceed to Town, – I went to Mrs Morrises – the children was very well and chearfull all the way, Nelly complained very little of being sick as soon as I could I sent for the stay maker, and gave him your measure and dercted him to send the stays to Colo Biddle when done to be sent to you, – also two pairs of shoes of a new fashioned kind those with Low Heels are for you, shoe with the high heels is for Mrs Stuart, with a pr a piece for the two dear girls, – all which I hope has come to your hands before this

I set out on munday with Mrs Morris and her two Daughters, – and was met on Wednesday morning by the President Mr Morris and Colo H at Elizabeth town point with the fine Barge you have seen so much said off in the papers with the same oars men that carred [sic] the P. to New York dear little Washington seemed to be lost in a mase at the great parad that was made for us all the way we come the Governor of the state meet me as soon as we landed, and led me up to the House, the papers will tell you how I was complimented on my landing, – I thank god the Prdt is very well, and the Gentle men with him – are all very well, – the House he is in is a very good one and is handsomly furnished all new for the General – I have been so much engaged since I came hear that I have never opened your Box or derectors but shall soon have time as most of the visits are at an end – I have not had one half hour to my self since the day of my arrival, – my first care was to get the children to a good school, – which they are boath very much pleased at, – nelly shall begin Musick next week – she has made two or three attempts to write to you; but has never finished a letter – she is a little wild creature and spends her time at the windows looking at carriages, &c passing by which is new to her and very common for children to do – I wish you to take a prayer book your self and give one to Harriot the other two to be given to Betty & Patty Custis –

I shall think my self much obliged to Mrs Bassett for any particular notice she may take of Patty Dandridge – I have a great regard for her and wish to see her do well – When you write to your Brother remember me affectionately to them – I was very sorry that I was obliged to leve home so soon after they came to Mount Vernon – my dear Fanny remember me to all enquiring friends to Mr and Mrs [?] Washington the major and give sweet little maria a thousand kisses for me – I often think of the dear little engaging child – and wish her with me to hear her little prattle – we shall get the Cotters for her before she will want them – as no other kind of cushing are hear but the Crape cushing, or the hair draped like one I did not send one for you – all the genteel people say a crape cushing is not proper to send to you – but I think in the country where you cannot have a hair dresser they will do very well – my Hair is set and dressed every day – and I have put on white muslin Habits for the summer – you would I fear think me a good deal in the fashion if you could but see me – my dear Fanny send me by some safe convance my Black lace apron and handkerchief they are in one of my drawers in the chest of drawers in my chamber – and some thread lace or joining nett it is in one of the Baskets on the shelf in my closet they were fine net Handkerchiefs which I intended to make cap borders off – I think I showed it to you and told you I intended to make a border of them – if my black Handkerchief is not in the drawer Charlot knows where it is to be found – I should think that there could not be any impropriety in Hariots going to see her cosin when ever she desired it remember me to all and believe me your most affectionate