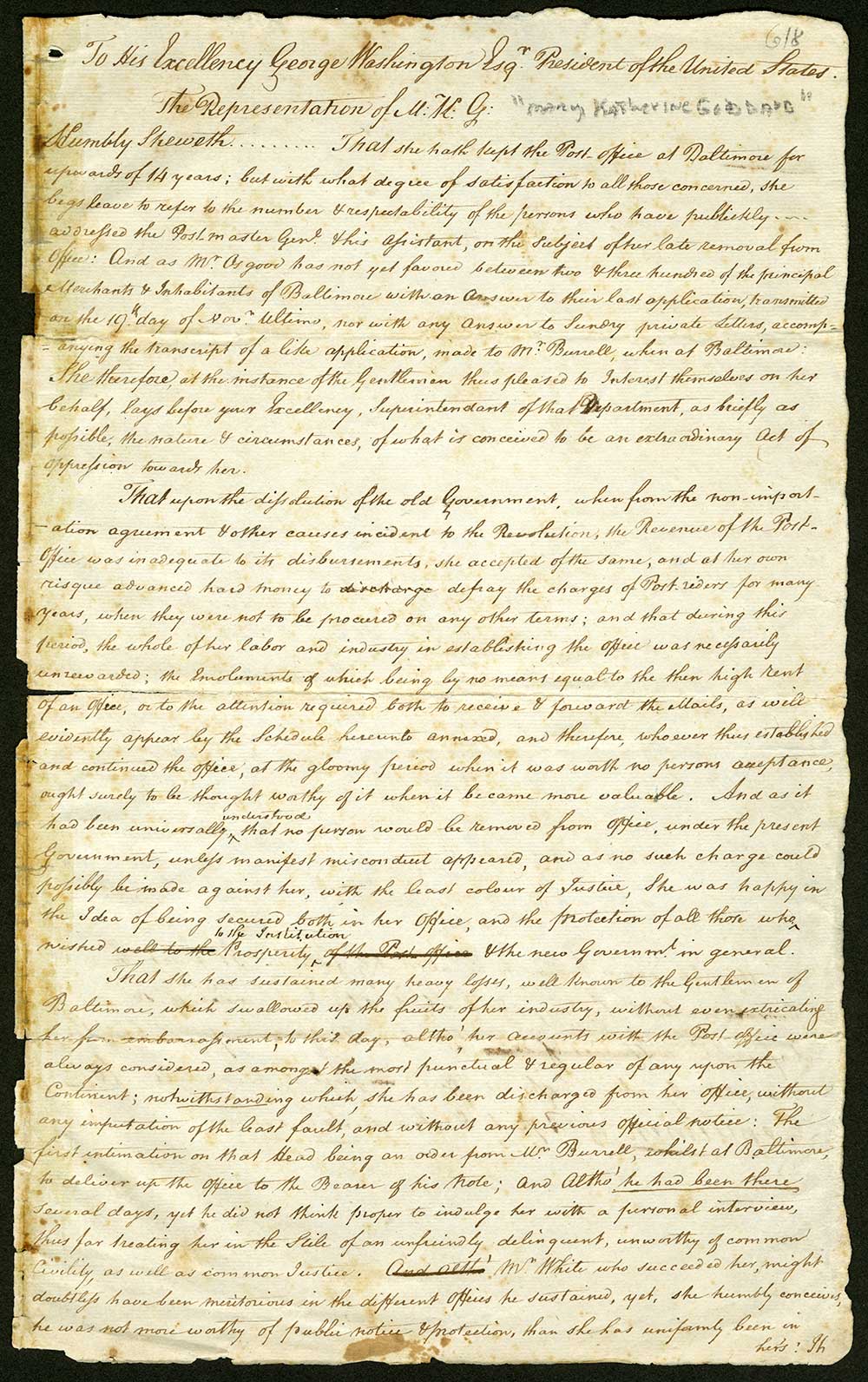 She has been discharged from her Office, without any imputation of the least fault, and without any previous official notice.

The addition to the Gilder Lehrman Collection of letters surrounding the firing of Mary Katherine Goddard illuminate and contextualize a document that has been in the collection for decades. In particular, they highlight the history of women's rights during the founding era.

. . . the whole of her Labour & Industry in establishing the Office was necessarily unrewarded . . .

Mary Katherine Goddard was an influential early American printer and part of the Goddard publishing family, which included her brother, William, and their mother, Sarah Updike Goddard. Their father, Giles Goddard, was a physician and postmaster). Mary Katherine managed her brother’s press and newspaper, The Maryland Journal, from 1775 to 1784, during the American Revolution. She simultaneously ran the Baltimore post office, which became her only job in 1784 when her brother resumed management of the journal. In 1789, the new Postmaster General of the United States, Samuel Osgood, fired her from the position at which she had excelled for fourteen years and installed an inexperienced new Postmaster of Baltimore named John White.

. . . an extraordinary Act of oppression towards her.

Here began Mary Katherine Goddard’s campaign to get her job back. She sent to Samuel Osgood a petition signed by 235 prominent citizens of Baltimore, all supporting Goddard’s excellent work as postmaster and personal commitment to justice. Osgood’s dismissal of the petition led to further letters from prominent figures in Baltimore to President George Washington, followed by Goddard writing directly to Washington herself in a formal third-person account of her mistreatment and the state of financial hardship resulting from losing her position, providing written proof of the quality of her work in the form of her accounts for Baltimore funds related to the post office.

And as it had been universally understood, that no Person would be removed from Office, under the present Government, unless manifest misconduct appeared, and as no such Charge could possibly be made against her, with the least colour of Justice, She was happy in the Idea of being secured both in her Office, and the Protection of all those who wished well to the prosperity of the Post Office, & the new Government in general.

Washington’s response to Goddard (which has long been part of the Gilder Lehrman Collecton), while sympathetic, ultimately gave full authority to Osgood to “appoint his own Deputies,” essentially saying the President’s hands were tied and he could not help her.

After pressing her case throughout 1790 in both the House and Senate with similar results, Goddard finally relinquished her career as postmaster and ran a bookshop in Baltimore until 1810.

Her letters and those written on her behalf, and the response of George Washington, are a testament to her achievement running businesses usually relegated to men as well as the limitations set on women in that period.

. . . that She may be restored to her former Office, and as in duty bound, She will ever pray &c.