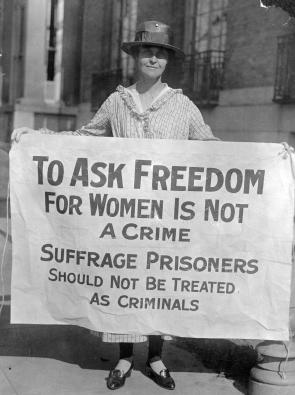 The Pankhursts and their militant strategy had an influence on American activist Alice Paul. On October 20, 1917, Alice Paul was arrested for picketing at the White House for the right to vote. Paul led the picket line with a banner reading "The time has come to conquer or submit for there is but one choice - we have made it." She was sentenced to six months in prison. Paul considered herself a political prisoner. She went on a hunger strike and was subject to forced feeding at Occoquan Workhouse in Virginia along with dozens of colleagues, including Mary Winsor, pictured at right.