The Pierce Butler Papers from the US Constitutional Convention

This archive of twenty-six documents was compiled by Pierce Butler when he served as one of South Carolina’s delegates to the US Constitutional Convention in 1787. It includes the printed first and second drafts of the Constitution; two small notebooks of proceedings; contemporary copies of the Virginia (or Randolph) Plan favoring larger states in Congress, the New Jersey (or Patterson) Plan favoring smaller states, Hamilton’s plan for a bicameral legislature and permanent executive, and Franklin’s compromise—all of which were used by Butler during the debates. These documents provide a unique view of the various conflicts that permeated the convention and help bring to life the process of creating the United States Constitution. In comparison to James Madison’s meticulous notes, Butler’s notes are sloppy and, at times, emotionally charged.

Born in County Carlow, Ireland on July 11,1744, Pierce was the third son of Sir Richard Butler, Baronet and member of Parliament for County Carlow, and Henrietta Percy Butler. As a third son, Butler would not inherit his family’s land, so his father bought Pierce a commission in the British army. He served in Canada and the colonies, most famously as a member of the 22nd Regiment at the Boston Massacre. In 1773, he sold his commission and bought land in Georgia and South Carolina, becoming one of the weathiest land owners and slave holders in the South.

We have selected a few of the archive’s unique items to highlight. A full pdf inventory is available.

Butler’s notebook from the first few weeks of the Convention records his thoughts regarding proposed resolutions. The notes survive despite the fact that the delegates were sworn to secrecy. However, it seems Butler was more inclined to heated debate than assiduous record keeping. This fact accounts for the incomplete, enigmatic nature of Butler’s notes. Despite these flaws, the comments do convey the tenor of the deliberations and provide an outline of some of the debates and the character of Butler’s participation. This document offers a partial cross-section of the first six weeks of the Convention as limited by Butler’s interests, goals, and energy (or lack thereof) for note taking. The fifth page of the journal is covered in doodles and incoherent notes. 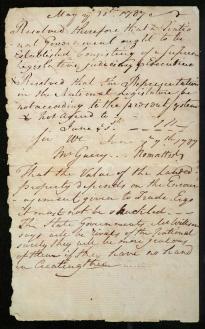 That the Value of the Landed property depends on the Encouragement given to Trade – Ergo it must not be shackled – – – The State Governments Mr Willson says will be rivals of the National surely they will be more jealous of them if they have no hand in Creating them . . . . 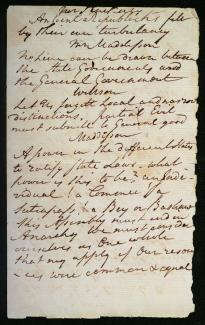 A power in the different States to ratify State Laws, what power is this to be?  an individual!  a C[illegible]!  a Satrapass! a Bey or Bashaw This Assembly must end in Anarchy  We must consider ourselves as One whole that may apply if Our resources were common & equal 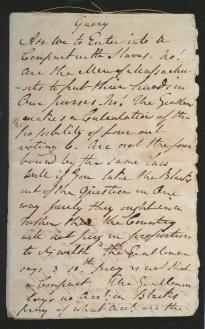 Are we to Enter into a Compact with Slaves–No! Are the Men of Massachusetts to put their hands in our purses – No! The Gentleman makes a Calculation of the possibility of four out voting 6. Are not the four bound by the same law Well if you take the Blacks out of the question in One way surely they ought in another than the Country will not pay in proportion to its welth [sic] the Gentleman say 3 10.th pray is not that a Compact. The Gentleman says no acct. on Blacks pray of what acct. are the 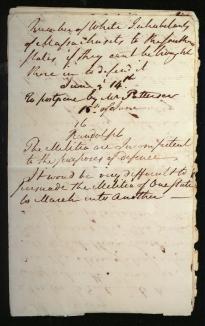 To postpone by Mr. Patterson 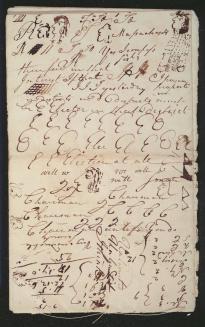 >Pierce Butler proposed the Fugitive Slave Clause at the Convention on August 29, 1787. Interestingly, the draft of the proposal in Butler’s papers has some variations, is not in Butler’s hand and a note on the back that indicates it may have been drafted at a local tavern. The draft in his notes states: "the legislatures of the several states shall make provision for the recovery of such person"—a term he did not include in his official resolution to the Convention.

A Plan to Divide the States into Three Allied Countries

James Madison wrote in a letter to Thomas Jefferson on October 24, 1787: "It appeared to be the sincere and unanimous wish of the Convention to cherish and preserve the Union of the States. No proposition was made, no suggestion was thrown out, in favor of a partition of the Empire into two or more Confederacies" (Bernard Bailyn, The Debate on the Constitution: Federalist and Antifederalist Speeches, Articles, and Letters during the Struggle for Ratification, Volume 1:193). Although the Convention's wish to maintain the Union may have been unanimous on the record, this resolution proposed the division of the county into smaller republics. 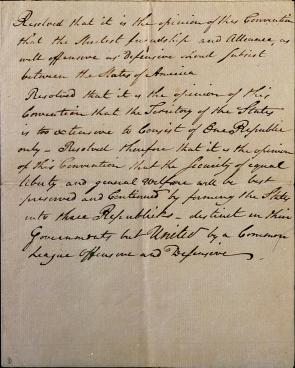 Resolved that it is the opinion of this Convention that the Strictest friendship and Alliance, as well offensive or defensive should Subsist between the States of America.