Sing Along with the Lincoln Campaign Songster and Other Election Songbooks

There are currently fifty-seven items from the Gilder Lehrman Collection on loan at the Gettysburg National Military Park for an exhibition about American democracy. Among these items are three presidential candidate songbooks from 1856 to 1880 that shed unique light on the concerns, obsessions, and political maneuverings in the lead-up to nineteenth-century elections.

Fremont Songs for the People 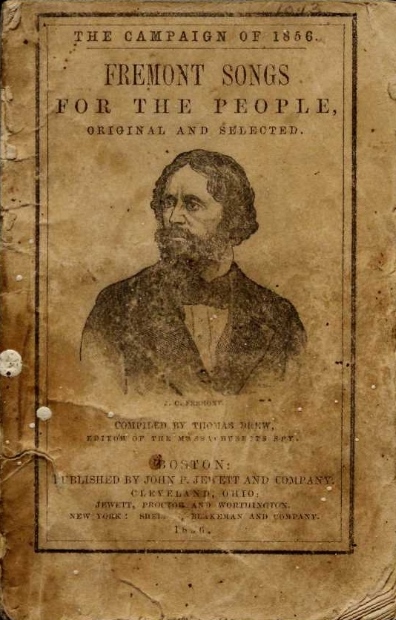 In 1856 a three-way presidential race saw Democrat James Buchanan defeat a former Whig, President Millard Fillmore, and the first candidate of the new Republican Party, John C. Frémont. The songbook Fremont Songs for the People, like the others in the Collection, presents lyrics with a note identifying a tune or air to accompany them.

For instance, in lyrics celebrating Frémont’s wife, Jessie, the chorus of the still popular “Oh, Susannah” is the tune for

Rise, bold freemen,
Arise from hill and dale;
Your watchword, “Jessie, and the right,”
There’s no such thing as fail!

James Buchanan, the only lifelong bachelor to become president, is mocked in the next song in the book, “The Bachelor Candidate,” which declares, “A man is but moonshine who has n’t a wife.” 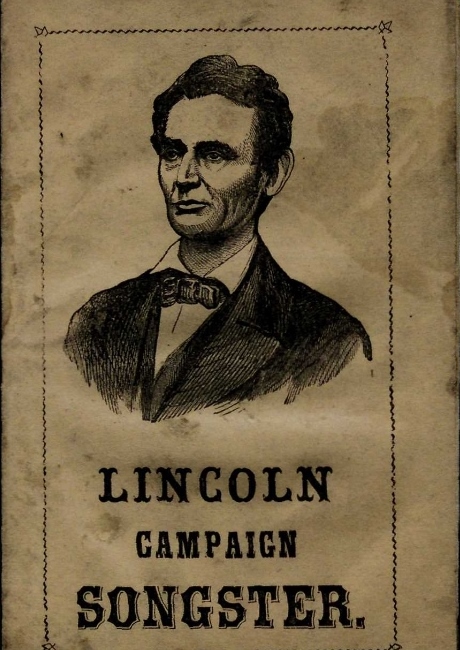 Intended for use by political clubs, the Lincoln Campaign Songster stands out as a record of the Civil War as well as the 1864 re-election of Abraham Lincoln with a new vice presidential candidate, Andrew Johnson. Johnson had just been added to the ticket, replacing Lincoln’s first term vice president, Hannibal Hamlin of Maine. Hamlin, who was virulently anti-slavery and had encouraged Lincoln to issue his Emancipation Proclamation, had gone into the Republican National Convention thinking he would be renominated in 1864. But he found himself suddenly and overwhelmingly replaced by Andrew Johnson, a Southern Democrat who had opposed secession but was not opposed to slavery.

The chorus of “Give Us Noble Leaders” is

Give us, then, these noble leaders,
Lincoln and Johnson, firm and true,
They will fight on for the Union,
And the Constitution, too.

And yet, while the song encourages the electorate to rally to defeat General George McClellan, it says nothing further of Andrew Johnson’s nobility or even significance.

The “Veteran Volunteer” focuses on the perspective of the “veteran soldier, who bravely fought and fell”: “We’ve tried our noble President, through trouble and through war, / And now we’ll show our gratitude, and give him four years more." 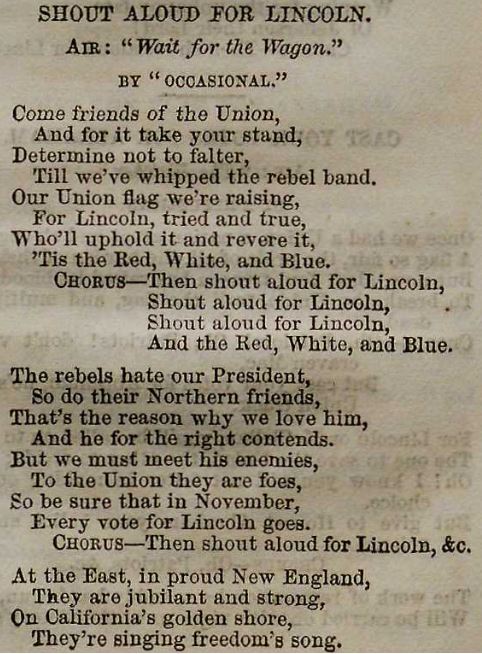 A verse from “Shout Aloud for Lincoln” proclaims:

At the East, in proud New England,
They are jubilant and strong,
On California’s golden shore,
They’re singing freedom’s song.

Many songs castigate not only the traitors and rebels of the South but the Peace Democrats and “Northern sympathizers [who] assist the rebel horde.” In “Hoist the Flag for Abraham,” Buchanan is impugned for assisting the “wicked rebel cause” and becoming their “supple tool.” In “Preserve the Union,” for example,

While our soldiers have been fighting,
That the war might sooner cease;
Northern Copperheads have been crying
“Give us a degrading peace.”

“We Are Coming, Father Abraham, 600,000 More” is the final song in the book, and the only one to credit a composer, though the song seems to be a variation of a poem by James S. Gibbons called “Three Hundred Thousand More,” which was set to music by Stephen Foster in 1862. Here the words are credited to J. Cullen Bryant and the music to D. A. Warden. 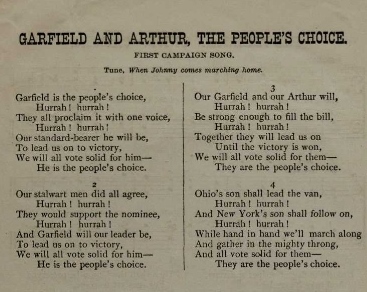 The Garfield and Arthur Campaign Songbook of 1880 resonates as particularly poignant when it is remembered that James Garfield was president for only six and a half months, most of which time he was dying of the gunshot wounds inflicted on him by the disgruntled office-seeker Charles Guiteau, who wanted Chester A. Arthur to become president.

This songbook provides music as well as lyrics for such songs as “My Country, Tis of Thee” and a song specific to the Garfield and Arthur campaign, “Vote for Garfield and for Law,” which references the voting rights of African Americans. Garfield’s campaign encouraged African American freemen to vote, even in the face of intimidation by Southern Democrats. 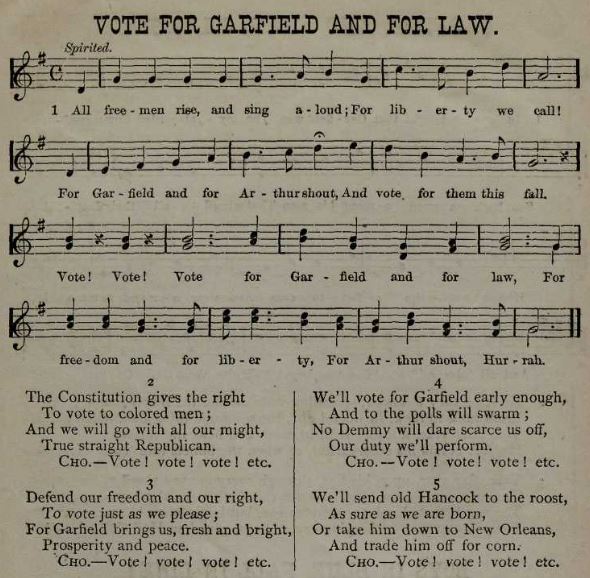