Things to Ponder on Columbus Day: The Columbian Exchange

On Monday, October 12, many Americans had the day off and stores hosted sales under the name of that 15th-century Italian explorer, Christopher Columbus. But Columbus’s impact on our world reaches past a 3-day weekend and great deals at department stores. The Columbian Exchange refers to the flow of goods between the Americas, Europe, and Africa that followed Columbus’s widely advertised "discovery" of the New World. People, animals, plants, and diseases passed from continent to continent . . . and nothing would ever be the same. 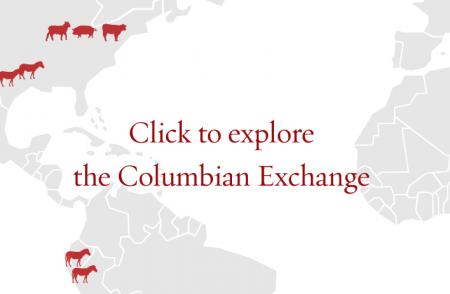 Find out more about the far reaches of the Columbian Exchange from historians Alfred Crosby and Brian Delay. Just think . . . without the Columbian Exchange, there’d be no Irish potato famine (potatoes are "New World"); no Chief Crazy Horse (horses came with the Spanish Conquistadors). The Columbian Exchange brought the Old World tobacco and tomatoes, and the New World the diseases that would bring about the death of millions of people. Check this space later this week for a look at Columbus’s post-landfall letter home to the Ferdinand and Isabella.