The Puerto Rican Experience in World War I

Between 18,000 and 20,000 Puerto Ricans served in the United States Armed Forces during World War I. [1] Puerto Ricans have been serving in the US military since 1899, when Congress authorized the creation of the Battalion of Porto Rican Volunteers in the aftermath of the Cuban-Filipino-Spanish-American War of 1898. However, before World War I, military service in Puerto Rico was limited to a single regiment of no more than 2,500 men who performed local colonial duties. World War I marks both the beginning of Puerto Rican units serving outside the island and of Puerto Rican mass participation in the armed forces of the United States, a trend that continues to this day.

The Puerto Rican experience in World War I is wrapped in myth. Perhaps the most insidious of these myths is the one in which US citizenship is extended to the people of Puerto Rico by an empire in need of manpower or cannon fodder for the Western Front. In fact, on March 2, 1917, the United States extended US citizenship to the Puerto Ricans via the Jones Act, and on April 6 it declared war on Germany and the Central Powers. Was US citizenship extended to the Puerto Ricans in order to draft them into the military? The answer is, no, not at all. History is more than a chronology of events leading to each other. But this issue is worth discussing.

The United States took over Puerto Rico in the aftermath of what US historians call the Spanish-American War. Puerto Rico was one of the military and diplomatic objectives sought by US strategists. Once in possession of the Puerto Rican archipelago, the United States had to decide what to do with its inhabitants. A military government followed after the war but by 1900 Congress approved the Foraker Act which gave Puerto Rico its first civilian government under US sovereignty. One of the most important aspects of this law is that it made the island’s inhabitants “Citizens of Porto Rico” and “American Nationals” under the protection of the United States.

This often overlooked fact is key to understanding why the United States did not need to extend US citizenship to the Puerto Ricans so they would be subjected to the Registration Act of May 18, 1917 (the draft). The only people who were to be excluded from the draft were foreign aliens who declared they would not become citizens and who had entered the country after the declaration of war. Moreover, the draft did not call for citizens to register but for “American Nationals,” which Puerto Ricans had been since 1900. Further, when the original draft law was passed it excluded Puerto Rico. On May 20, just two days after Congress passed the Selective Service Law, the Puerto Rican Chamber of Delegates (an elected colonial legislature) demanded that Puerto Rico be included in the draft and the war plans as a matter of equality.

The question remains: Why did the US extend citizenship to the people of Puerto Rico in 1917? There were many reasons. Military planners worried that American territories would be hard to defend from an invasion if the native population did not support the American forces. Between 1915 and 1917 there was growing discontent with American rule among Puerto Rico’s population. For the US War Department, stability on the island was essential to securing US hegemony in the Circum-Caribbean. Powerful lobbyists (including congressmen, military theorists, former presidents, and governors of Puerto Rico) argued that citizenship would quench unrest in Puerto Rico and lead to socio-political stability.

The Woodrow Wilson administration also believed that it would gain diplomatic clout from granting citizenship and some measures of self-government to the Puerto Ricans. Citizenship for the Puerto Ricans would strengthen President Wilson’s envisioned peace—part of which was based on the self-determination of nations. On December 7, 1915, Wilson had made clear to Congress that as part of obtaining international credibility, both for his policy of bettering relationships with Latin America and for his New Diplomacy efforts to end WWI, the United States had to approve the Jones Act expanding the civilian government in Puerto Rico and extending US citizenship to its inhabitants.

When citizenship was extended to the Puerto Ricans, enlisting them to fight in World War I was not part of the equation. Puerto Ricans were not wanted by a racist military that deemed non-white men as inferior. Citizenship had been touted as an act of decolonization, so once the draft law passed and eventually extended to the island, Puerto Ricans’ embrace of the draft became a referendum on the acceptance of citizenship, and of American rule. The presidentially appointed governor of Puerto Rico, Arthur Yager, feared that Puerto Ricans may not show up for the first registration date, but they proved him wrong.

On July 5, 1917, some 104,550 Puerto Ricans registered for the draft. For a country with few paved roads and even fewer motor vehicles, mobilizing more than one hundred thousand men was a logistical feat. That so many Puerto Ricans registered that first day was due to the effort of local volunteers who combed the island instructing the men where to go and what to do to make the first registration date a success. Eventually, 236,853 men enlisted for selective service. Of the tens of thousands of volunteers and draftees called for examination only 17,855 were accepted and ordered to report for service. Only 139 men did not report for duty. 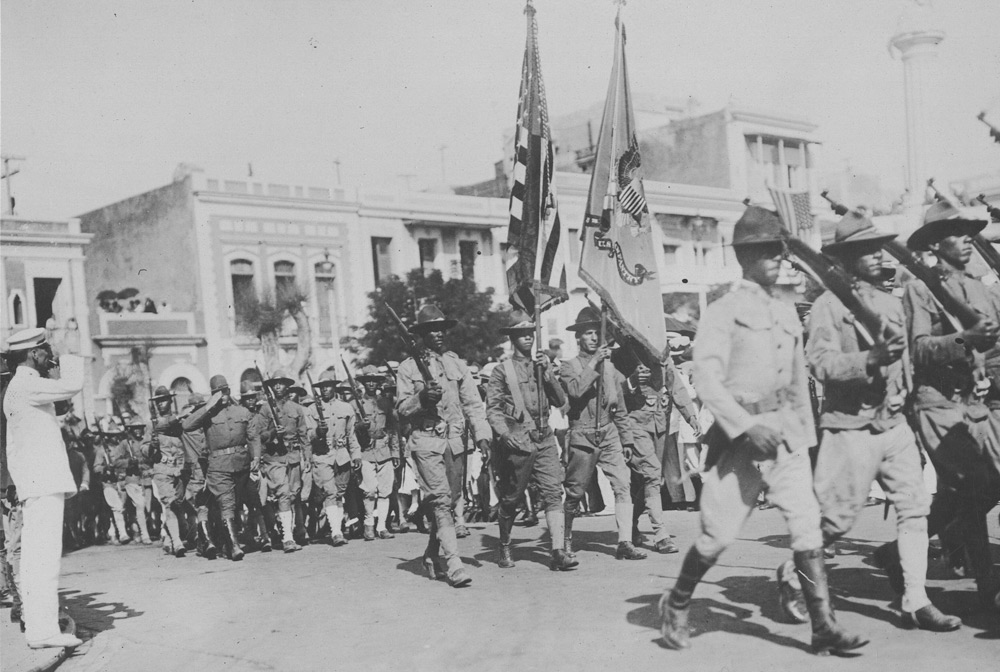 The first two were assigned to Tactical Brigade 187 while the 375th Colored and the projected 376th were to form part of Tactical Brigade 188. A Home Guard, “Guardia de la Patria,” was also established to take over defense of the island in the unlikely case that the Puerto Rican division was sent overseas.

Though unconvinced of their value as first-line combat troops, the War Department believed that mobilizing Puerto Ricans would prove useful. These soldiers could relieve white continental American soldiers from non-combat assignments, freeing them for combat duty, while inspiring loyalty among the population of the island. The political and economic value of mobilizing as many Puerto Ricans as possible was well understood by the War Department. In December 1918, Frank McIntire, chief of the Bureau of Insular Affairs, wrote a memorandum to the chief of War Plans Division informing him of the political, economic, and social benefits of mobilizing Puerto Rico’s “large surplus population, that is, a population for who in the present there is no continuous employment.” After making clear that his views were not of a military nature, McIntire reported that the men who had gone through military training on the island “have been very much improved, physically and otherwise, and are better off for having had it and to that extent are of greater economic value.” [2]

Unbeknownst to the Puerto Rican recruits and officers enthusiastically training in Puerto Rico and hoping to participate in the “war to end all wars,” the US military had no plans to ever send them into combat. At best, they could free “white” troops to do the real fighting. McIntire reminded Yager that training in the US would “make them [Puerto Ricans] better men on returning to Porto Rico, physically and otherwise, this, even though they should not go abroad at all for service.” [3] The war ended before the Porto Rican Division finished its training in Camp Las Casas.

Unlike the Porto Rican Division, the Porto Rican Regiment went abroad during the war. On July 1, 1908, under authority of an act of Congress approved on May 27, the Puerto Rico United States Volunteers had officially become part of the regular army and was named the Porto Rico Regiment of Infantry USA. During World War I, the Porto Rican Regiment saw its role extended to include the defense of the Panama Canal. The possibility of a German attack on this facility, however, was practically non-existent. In theory, Mexico could pose a threat to the canal, but it rejected German overtures to join the Central Powers. The Porto Rico Regiment’s role during the World War I, even if serving abroad, was that of freeing white American units for the Western Front. No one was going to attack the canal.

During World War I, many Puerto Ricans volunteered or were drafted or recruited while residing in the continental United States. They were sent to either black or white units depending on their skin color.

A curious case is that of James Reese Europe, a distinguished African American jazz musician who obtained an officer commission with the New York National Guard 15th Regiment, which fought under French command as the 369th Colored Infantry Regiment. The 369th would be known as the “Harlem Hellfighters” for their distinguished role in France. 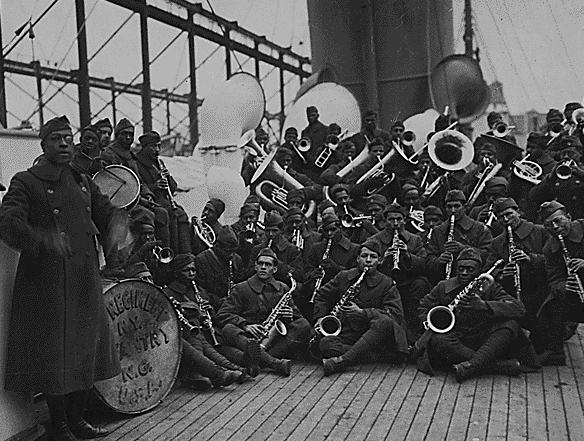 Unlike most black units, the 369th saw combat because it was placed under French command. Due to the high casualties suffered by the French Army since 1914—the loss of a whole generation of men by the end of the war—the French command was no longer squeamish about who they allowed to fight to save France from defeat. When they returned from the war, the Men of Bronze of the 369th marched proudly in full battle gear on Fifth Avenue all the way to their headquarters in Harlem.

The Puerto Rican press, elected officials, and politicians lamented that the island’s soldiers did not have the chance to prove on the fields of France their martial prowess, manhood, and capacity for full citizenship, self-determination, and self-government. Even Pedro Albizu Campos, the future nationalist leader who had joined the officers’ training camp in Puerto Rico and was commissioned as a first lieutenant in the 375 th Porto Rican Colored Regiment, lamented decades later that the Porto Rican Division never reached the Western Front. He believed that experiencing the Western Front’s carnage, spilling Puerto Rican blood, and having thousands of Puerto Rican veterans return could had been transformative for the Puerto Rican nation. [4] But not everything had been lost. From the Porto Rican Division would emerge the Puerto Rico National Guard, which continues to serve to this day. After its return from Panama, the Porto Rico Regiment of Infantry was renamed the 65th Infantry Regiment, United States Army. It would serve in World War II but was kept from the front. Its men finally fought as first-line combat troops in the Korean War, where they distinguished themselves. The United States finally recognized a century of unheralded service when it presented the 65th Regiment’s men (the “Borinqueneers”) with the Congressional Gold Medal in April 2016. Not only did Puerto Ricans volunteer to defend the United States against its enemies, but they also fought prejudice, racism, segregation, and colonialism, returning home to build a better Puerto Rico.

[1] Parts of this essay have been previously published by Harry Franqui-Rivera in Soldiers of the Nation: Military Service and Modern Puerto Rico, 1868−1952 (University of Nebraska Press, 2018) and in “The Puerto Rican Experience in the US Military: A Century of Unheralded Service,” 2017 ( https://centropr.hunter.cuny.edu/digital-humanities/pr-military/puerto-rican-experience-us-military-century-unheralded-service ).

Harry Franqui-Rivera is Associate Professor of History at Bloomfield College in New Jersey. He is the author of Soldiers of the Nation: Military Service and Modern Puerto Rico, 1868−1952 (University of Nebraska Press, 2018).