Civilian defense on the home front, 1942 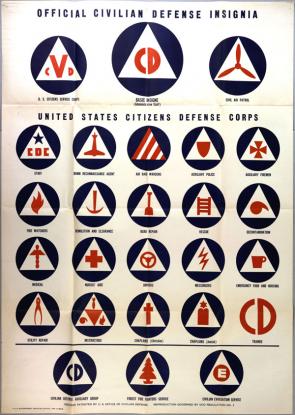 In the early days of World War II, air raids and other attacks on populated areas in Europe generated fears that similar attacks could happen in the United States. On May 20, 1941, more than six months before the United States entered the war, President Franklin Roosevelt set up the Office of Civilian Defense (OCD) to coordinate state and federal measures to protect civilians in a war-related emergency. The OCD organized the United States Citizens Defense Corps to recruit and train volunteers to perform essential tasks.

The insignia in the poster featured here, published in 1942, illustrate the numerous jobs assigned to civilian volunteers. Enrolled and trained volunteers displayed their insignia on arm bands and on uniforms or civilian dress. The OCD also published a handbook, The United States Citizens Defense Corps, to explain the duties and responsibilities of various positions:

Who Should Join.—All able-bodied, responsible persons in the community—men and women, housewives, laborers,

business and professional people—for the mutual protection of all. Boys and girls, and elderly people too, have work to do. The program is broad; the tasks are many; the time is now! . . .

<p>Read the introduction and study each of the images. Then apply your knowledge of American history to answer the following questions:</p>
<ol>
<li>Describe some of the concerns that led President Roosevelt to establish the United States Citizens Defense Corps.</li>
<li>Some argue that the Citizens Defense Corps as well as other home front activities, such as scrap drives and Victory gardens, inspired in Americans a spirit of “we are all in this together.” Present an argument to support or oppose this theory.</li>
<li>Examine the pages in the handbook concerning the Drivers Corps, Messengers, Rescue Squads, and Emergency Food and Housing Corps, and then summarize for each:</li>
</ol>
<ul style="margin-left: 40px;">
<li>Who would be recruited as a member?</li>
<li>What were the responsibilities of the job?</li>
<li>What training was necessary for participation?</li>
<li>How were these corps members expected to assist regular emergency personnel?</li>
</ul>
<h6>For a printer-friendly version, click&nbsp;<a href="https://www.gilderlehrman.org/sites/default/files/inline-pdfs/09520.36_…; title="here">here</a>.</h6>