Lyndon B. Johnson proclaims a national day of mourning for JFK, 1963

A Spotlight on a Primary Source by Lyndon B. Johnson 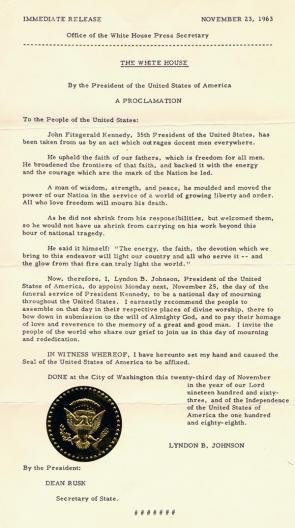 On November 22, 1963, President John F. Kennedy was assassinated in Dallas, Texas, by Lee Harvey Oswald. The next day, the newly sworn-in Lyndon B. Johnson issued his first presidential proclamation. In a statement that was broadcast on both television and radio, he declared November 25, 1963, the day of President Kennedy’s funeral, a national day of mourning. Johnson praised the late president, but also directed the American people to look to the future:

He upheld the faith of our fathers, which is freedom for all men. He broadened the frontiers of that faith, and backed it with the energy and the courage which are the mark of the Nation he led.

A man of wisdom, strength, and peace, he moulded and moved the power of our Nation in the service of a world of growing liberty and order. All who love freedom will mourn his death.

As he did not shrink from his responsibilities, but welcomed them, so he would not have us shrink from carrying on his work beyond this hour of national tragedy.

He said it himself: “The energy, the faith, the devotion which we bring to this endeavor will light our country and all who serve it -- and the glow from that fire can truly light the world.”

Across the country, schools, businesses, and government offices closed in observance of the day of mourning. Many watched the funeral on television, while others heeded President Johnson’s call to attend memorial services.

Now, therefore, I, Lyndon B. Johnson, President of the United States of America, do appoint Monday next, November 25, the day of the funeral service of President Kennedy, to be a national day of mourning throughout the United States. I earnestly recommend the people to assemble on that day in their respective places of divine worship, there to bow down in submission to the will of Almighty God, and to pay their homage of love and reverence to the memory of a great and good man. I invite the people of the world who share our grief to join us in this day of mourning and rededication.

A pdf of the document is available here.

Read the introduction and study the document. Then apply your knowledge of American history to answer the following questions: