A Spotlight on a Primary Source by George III 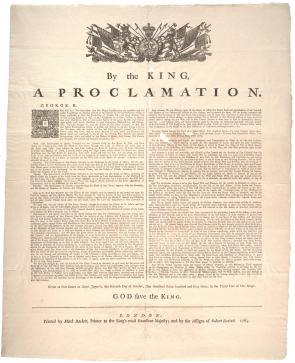 At the end of the Seven Years’ War in 1763, France surrendered Canada and much of the Ohio and Mississippi valleys—two-thirds of eastern North America—to England. The Proclamation of 1763 “preserved to the said Indians” the lands west of the Appalachian Mountains and ordered White settlers “there forthwith to remove themselves from such Settlements,” forbade White settlement, and restricted commerce with the American Indians to traders licensed by the British government, requiring settlers to “take out a License for carrying on such Trade from the Governor or Commander in Chief of any of Our Colonies respectively.” Power over westward expansion was in the hands of British officials, outside the colonists’ control. By preventing the colonial population from moving inland the British ministry hoped to avoid costly wars, protect the western fur trade, and keep western land speculation under the control of the crown. To enforce the proclamation, Britain authorized positioning 10,000 troops along the frontier, with the costs of 250,000 pounds sterling per year to be paid by the colonists. The Americans, who looked at the new land as an opportunity for settlement without the interference of the British government, resented the terms of the proclamation.

And We do further strictly enjoin and require all Persons whatever, who have either wilfully or inadvertently seated themselves upon any Lands within the Countries above described, or upon any other Lands, which, not having been ceded to, or purchased by Us, are still reserved to the said Indians as aforesaid, forthwith to remove themselves from such Settlements.  And whereas great Frauds and Abuses have been committed in the purchasing Lands of the Indians, to the great Prejudice of Our Interests, and to the great Dissatisfaction of the said Indians; in order therefore to prevent such Irregularities for the future, and to the End that the Indians may be convinced of Our Justice, and determined Resolution to remove all reasonable Cause of Discontent, We do, with the Advice of Our Privy Council, strictly enjoin and require, that no private Person do presume to make any Purchase from the said Indians of any Lands reserved to the said Indians, within those Parts of Our Colonies where We have thought proper to allow Settlement; but that if, at any Time, any of the said Indians should be inclined to dispose of the said Lands, the same shall be purchased only for Us, in Our Name, at some Publick Meeting or Assembly of the said Indians to be held for that Purpose by the Governor or Commander in Chief of Our Colonies respectively, within which they shall lie; and in case they shall lie within the Limits of any Proprietary Government, they shall be purchased only for the Use and in the Name of such Proprietaries, conformable to such Directions and Instructions as We or they shall think proper to give for that Purpose: And We do, by the Advice of Our Privy Council, declare and enjoin, that the Trade with the said Indians shall be free and open to all Our Subjects whatever; provided that every Person who may incline to trade with the said Indians, do take out a License for carrying on such Trade from the Governor or Commander in Chief of any of Our Colonies respectively, where such Person shall reside; and also give Security to observe such Regulations as We shall at any Time think fit, by Ourselves or by Our Commissaries to be appointed for this Purpose, to direct and appoint for the Benefit of the said Trade; and We do hereby authorize, enjoin, and require the Governors and Commanders in Chief of all Our Colonies respectively, as well Those under Our immediate Government as Those under the Government and Direction of Proprietaries, to grant such Licenses without Fee or Reward, taking especial Care to insert therein a Condition, that such License shall be void, and the Security forfeited, in case the Person, to whom the same is granted, shall refuse or neglect to observe such Regulations as We shall think proper to prescribe as aforesaid.

Read the introduction as well as the transcript of the attached original document. It may be helpful to also refer to a map of North America to identify those areas mentioned in the document.