Even though the Sedition Act of 1798 had expired in 1801, individuals could still be charged with sedition. On January 20, 1815, Thomas Rowe and Joshua Hooper, publishers of the Massachusetts newspaper The Yankee, printed an article criticizing the governor and state legislature for failing to follow through on threats to secede from the United States during the War of 1812. Within days they were arrested for sedition and brought before the Supreme Judicial Court of the Commonwealth of Massachusetts.

The War of 1812 between England and the United States was unpopular in New England. The Federalist-dominated region favored peace with England and feared that war would lead to economic ruin for the trade-reliant region. The Massachusetts House of Representatives condemned the war on June 26, 1812, eight days after the US declared it. On August 5, Massachusetts governor Caleb Strong refused to commit the state militia to the war effort. In the summer and early fall of 1814, British ships targeted the New England coast and an offensive into Maine resulted in the most sizable capture of US territory in the war. Governor Strong and President James Madison refused to send troops to protect Maine.[1] 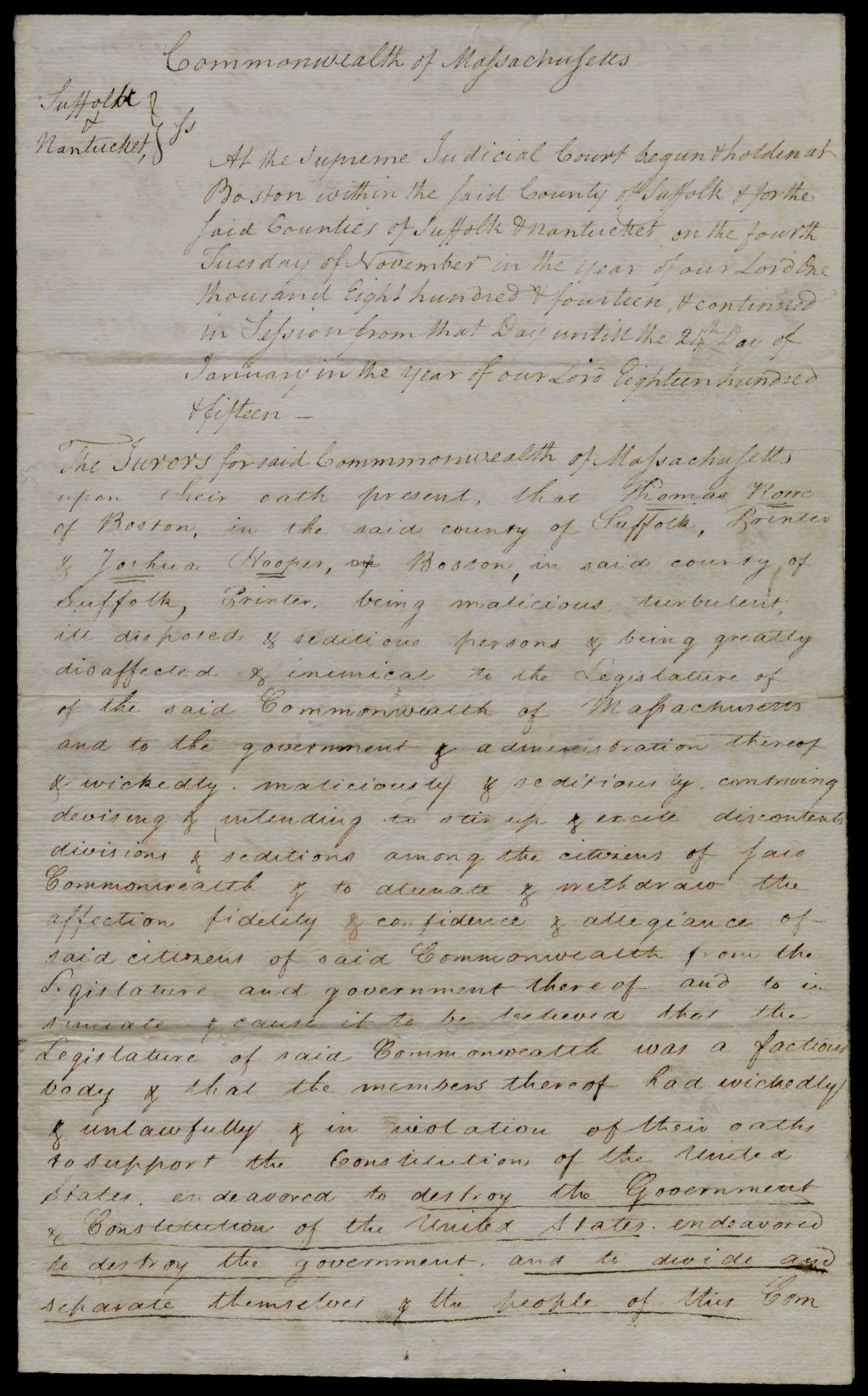 Shortly after, Governor Strong sent secret emissaries to Canada to negotiate a separate peace, and called for a convention of New England states to meet. The Hartford Convention met in Connecticut from December 15, 1814 to January 5, 1815. Many suspected the secret convention planned to discuss secession from the United States. Instead, the delegates asked the federal government to protect New England and to supply financial aid. It also recommended a constitutional amendment requiring a two-thirds vote for a declaration of war.

The article printed in The Yankee condemns Governor Strong and the Massachusetts legislature for not seceding from the Union, labeling them “a factious, but a lifeless body . . . No body of men now look towards them for any great effort either against the National Government, or even against the enemy who are now in quiet possession of one third of the territory of Massachusetts.” The article also condemns the governor for not adhering to his responsibilities as specified in the Massachusetts constitution: “to encounter, repel, resist, expel, and pursue by force of arms, to kill, slay and destroy if necessary, and conquer by all fitting ways, all and every such person and persons who shall at any time, in a hostile manner, attempt or enterprise the destruction, invasion, detriment or annoyance of this Commonwealth.”[2]

The Massachusetts jury found Rowe and Hooper guilty of sedition “To the evil & pernicious example of others in like care to offend & against the peace & dignity of the Commonwealth aforesaid.”

See the full transcripts for these documents in the PDF at the bottom of the page.

The wise men of the Massachusetts Legislature met on Wednesday. We never have witnessed, within our recollection, so little notice taken of the sitting of this body, as appears at be of the present. It is now ascertained to be a fact, that they are a factious, but a lifeless body, that is, they have shewn all possible disposition to prostrate the National Government, and sever themselves from the Union, but they have neither the nerve nor courage to do it, and they have frankly acknowledged it. No body of men now look towards them for any great effort either against the National Government, or even against the enemy who are now in quiet possession of one third of the territory of Massachusetts.—Yet we find the solemn oath which Gov. Strong took when he was sworn into office, to protect the State, “to encounter, repel, resist, expel, and pursue by force of arms, to kill, slay and destroy if necessary, and conquer by all fitting ways, all and every such person and persons who shall at any time, in a hostile manner, attempt or enterprise the destruction, invasion, detriment or annoyance of this Commonwealth.”

One would suppose that any man that would take such an oath, and act as Gov. Strong has done, would not feel very well about the conscience. This is a fit subject of enquiry for the Republicans in both Houses. They must fasten the blame of this shameful event in Maine, very close upon the back of Gov. Caleb—and let him shoulder it off on his advisers if he can.

[Jury decision of the Supreme Judicial Court of the Commonwealth of Massachusetts]. Boston, Massachusetts, ca. January 24, 1815]

on the twentieth day of January . . . wickedly, maliciously and seditiously did print and publish and cause & procure to be printed & published in a certain newspaper called the “Yankee” . . . a certain false scandalous, malicious & seditious Libel of & concerning the said Legislature of said Commonwealth of Massachusetts which said false scandalous & malicious & seditious libel is of the following purport & effect, that is to say “Massachusetts Legislature” . . . (meaning that the members of said Legislature of Massachusetts possessed the will but not the power, to destroy the constitution & government of the said United States . . . & meaning also, that the people of this Commonwealth & the constituents of them the said members of said Legislature . . . had no confidence in the said members & in the said Legislature, & that they did not expect & did not look to them . . . for any great effort to provide for them the means of protection and defence against the invasions & depredations of the fleets & armies & of the enemy aforesaid)