Articles of Confederation: On This Day, November 17 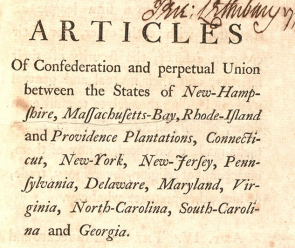 A day after appointing a committee to write the Declaration of Independence, the Second Continental Congress named another committee to write the Articles of Confederation. The members worked from June 1776 until November 17, 1777, when they sent a draft to the states for ratification. Maryland was the last state to ratify, holding out until March 1, 1781.

More of a treaty—or a "firm league of friendship"—than a constitution, the Articles of Confederation in no way infringed upon the sovereignty of the original thirteen states. The Congress, the primary organ of the new national government, only had the power to declare war, appoint military officers, sign treaties, make alliances, appoint foreign ambassadors, and manage relations with the American Indians.

But the very loose ties of the Articles made them inadequate as the new nation faced a multitude of challenges through the 1780s. . . . Find out what happened next: